When one thinks of the Balearic Islands, Spain’s rich Islamic history doesn’t come to mind first. The island archipelago, resting in the western Mediterranean Sea, is renowned for its party scene, with Ibiza grabbing most of the attention.

Yet the biggest island is Majorca and the capital of the Balearics is its gorgeous coastal city of Palma. Travel here and you will discover intriguing traces of Islam that account for the 781 years (from the start of the conquest of Andalusia in 711AD to the fall of Granada in 1492) when Spain was under Muslim rule.

Its appeal to Muslim tourists may not be immediately apparent; Palma is not home to majestic monuments such as Córdoba’s Mezquita and Granada’s Alhambra. In its place are more subtle reminders of a powerful history that lingers through the mazy alleyways of its Arab Quarter, expansive Moorish gardens and elegant main cathedral.

With Palma’s Muslim tourism trail stretching from the city centre to its outer suburbs, you can base yourself either in one of the plethora of small boutique hotels in the heart of the city or seek out the nearby coastal suburbs of Playa de Palma and Portals Nous where most family-friendly resorts are located.

For more conservative families and travellers looking for a spot of relaxation – such as myself – I found the best option is to venture farther afield and visit the seasonal luxury resort Jumeirah Port Sóller Hotel & Spa (open from spring to autumn). It’s a 40-minute drive and €70 (Dh350) cab charge from Palma’s airport, but you are rewarded with breathtaking views of the Mediterranean courtesy of the white sandstone structure straddling a mountain that overlooks the quaint fishing town of Sóller.

The largest of the Balearic Islands, Majorca retains traces of Islamic influence, and its capital, Palma, still has an Arab Quarter.

Jumeirah is a UAE-based company, so prayer mats and markers pointing to Mecca are available. The hotel’s welcoming cocktail is readily changed to a fruit basket and juice, and the dining staff are more than willing to take you through halal options (vegetable and various fish grills, no meat) in the hotel’s breakfast buffet and the à la carte menus of the lunch and dinner service.

After a breakfast of vegetarian omelette and strawberry crêpes in the hotel’s cliff-front restaurant Cap Roig, I order a cab and exit the property before midday for a full day of Islamic sightseeing in Palma.

The vehicle wearily negotiates the tight turns as it descends the mountain to arrive at Sóller. The small town makes for a fine visit when staying at the resort (a 15-minute walk away), especially considering that it’s the nearest location to dine outside of the hotel. The U-shaped bay offers plenty of dining options with restaurants serving Mediterranean cuisine and tapas. Get there around 5pm and you will also get the chance to see local fishermen docking with the day’s catch.

With the town now in my rear-view mirror, the car continues down the narrow and winding roads until it reaches the main road to Palma, which is also a scenic drive; the two- lane roads are flanked by orange and lemon groves and forest. Hulking overhead is the Serra de Tramuntana; a Unesco-heritage-listed mountain range commanding a large swathe of Majorca’s north.

Twenty minutes and €35 (Dh175) later, the taxi leans into a gravelly service lane off the highway, about 17 kilometres from Palma. We drive past the metal gates and enter the Jardines de Alfabia (The Gardens of Al Fabia), a residence belonging to a former Muslim wali or viceroy.

Dating back more than 10 centuries, the site remains a spectacular example of a Moorish garden with its signature interplay of plant and water. The entry fee is €6.50 (Dh32) but there’s no tour guide available, so I decide to buy a guide for €3.50 (Dh17). Rebuilt over the centuries, the present house lies at the foot of the mountains, which, with today’s searing heat, act as a natural buffer from occasional gusts of hot wind.

The area’s high rainfall, numerous ponds, cascades and a water channel, powered by spring water emanating from solid mountain rocks 60 metres above, transform the property into a botanical garden with more than 40 types of flowers and plants.

While the wali’s original home has been refurbished over the years – the latest dates back to the 17th century with its Gothic and rococo architectural flourishes – there is not much indoors to denote its Muslim past.

I find such history back outside in an arched gatehouse. I encounter an arrow pointing above: squinting at the coffered ceiling made from pine and oak wood – the work of ­Almohad dynasty craftsmen from 1170 – I find a series of arabesque scrolls with intertwining red and gold lines. On a display case below lies the coat of arms, signifying the Arab families who lived here during the wali’s reign.

I follow the footpath up to a small, gurgling fountain. I am now at the highest peak of the property and get a glimpse of the ocean through a modern-day fence. It was from there, in September 1229, that the first Catalan ships belonging to King James I of Aragon arrived in the bay of what is now the resort town Santa Ponsa, nearly 20km south of Palma (the beaches are now occupied by resorts such as The St Regis and Sheraton).

By December, Madinat Majorca was the first to fall to the powerful Christian army and was renamed Palma de Majorca due to the city’s ample palm trees. The decisive victory kicked off the bloody end of Majorca’s Muslim rule, which, after three years of resistance by the Moorish troops hiding out in the Serra de Tramuntana, culminated in the island’s total conquest in 1229.

“They still left us with so many great things,” says Toni Cerdá from the Majorca Tourist Board, my walking guide in downtown Palma. “Where we are standing is an example of something that was designed by our Muslim friends.”

We are at our meeting spot at around 3pm: outside the family-run hotel Dalt Murada in the central district of Al Mudaina (Arabic for “The City”), also known as the Arab Quarter. In typical Palma fashion, the Arab influence does not immediately grab you. The area is not home to the Middle Eastern cafes and coffee shops that one could find in similarly named enclaves in other cities.

Look beyond the sale signs and you not only begin to see, but also feel, the traces left by Majorca’s Muslim forefathers.

Look beyond the sale signs and you not only begin to see, but also feel, the traces left by Majorca’s Muslim forefathers. The physical sensation is one of tightness; Al Mudaina is an almost endless maze of narrow streets that can barely fit a family-sized vehicle. The footpath is narrow enough for a solitary walker but Cerdá and I crowd with the rest of the locals. A casual stroll this is not, however, as our conversations are often rudely interrupted by honking cars as they attempt to pass through. Understandably, the Arab Quarter is the bane of most Majorcan taxis, as I find out when my driver sighed endlessly throughout our 30-minute cab ride, costing €25 (Dh125), from Jardines de Alfabia.

“When the Romans were here before the Arabs, the streets were very wide and straight,” Cerdá explains as we turn the corner. “The Arabs made a lot of roads tighter and narrower as we can see here. There are many reasons suggested for this, one is that this is what they were used to, another being that it gave homes a sense of privacy.” Luckily, the blue pocket-sized maps supplied by the Ajuntament de Palma (Majorca City Council) and the slightly larger one from the City Sightseeing bus tour company are detailed. 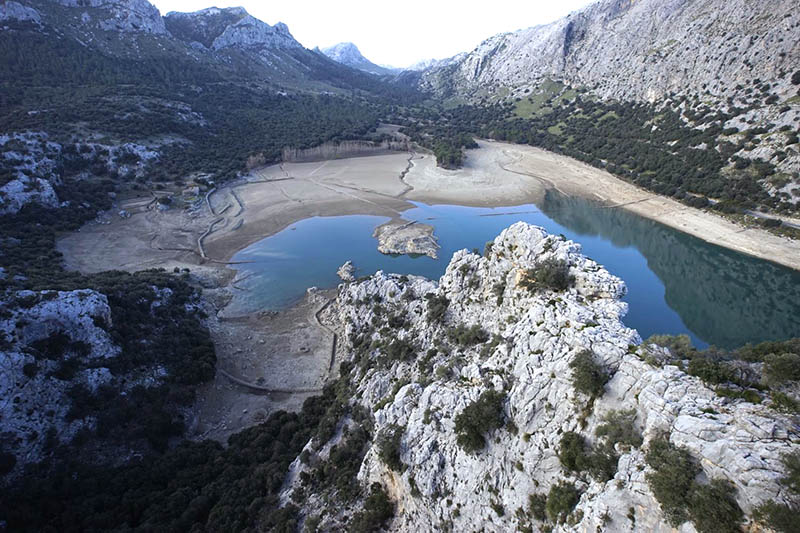 Tucked away quietly in a corner, near a convent, is the only remaining Moorish building in Palma. Dating back to the 10th century, Banys Àrabs (Arab Baths) charges a modest entrance fee of €2 (Dh10). I walk through a garden home to cacti and palm trees, ebullient with the sounds of the house sparrows that dart overhead.

While not operational, the horseshoe-shaped bathhouse is remarkably intact. The room is supported by 12, now rather weary-looking columns; the dome above is punctured by apertures, demonstrating how the hot steam would eventually escape and not totally suffocate the noble clientele of that era. With Moorish architecture renowned for its environmental sustainability, the bathroom is lit generously by natural sunlight wafting through a cupula and five separate oculi that are placed strategically across the room.

It is late in the afternoon and our last stop is Majorca cathedral, a 10-minute walk away from the Arab Quarter. Built in an ornate Gothic style, the church sits in what could be the city’s finest piece of real estate: overlooking a family park, Parc de la Mar, and the Mediterranean Sea. Cerdá explains the church was built over a pre-existing mosque in 1229 and completed by 1601. “The king at the time liked the location so he didn’t want to change it too much,” he says. “Because of that the church faces Mecca.” It may have been for locational purposes, but after my whirlwind of a day I am beginning to think the church’s positioning holds a deeper meaning: it serves as a symbol of Palma’s comfort with its past, and even, perhaps, a subtle acknowledgement that it was built on the shoulders of giants.