In these days of “lockdown” for a common good, our colleague Daniel Gil-Benumeya, Scientific Coordinator of our Centre for the Study of Islamic Madrid, suggests us a special and pleasant walk around the city of Madrid, which we are missing so much these days.

Would you join us on this guided tour through Madrid’s oldest maps? These are the maps drawn by Mancelli in 1622, and Texeira in 1656. Antonio Mancelli was an Italian cartographer, illuminator, painter, and merchant at the service of Philip IV of Spain, to whom the first known map of Madrid is attributed. Likewise, Don Pedro Teixeira Albernaz was a Portuguese cartographer at the service of the same Spanish king. His most famous work is the Mantua Carpetatorum sive Matritum Urbs Regia, better known as “the Map of Teixeira”. In fact, this map is a prodigy of details, so let’s start with it.

The map of Texeira begins with the Latin legend “Mantua de los Carpetanos o Matritum, ciudad regia”. Those names with classical resonances show the Habsburgs’ endeavour to find an ancient origin for Madrid, in line with the ambitions of an imperial capital. 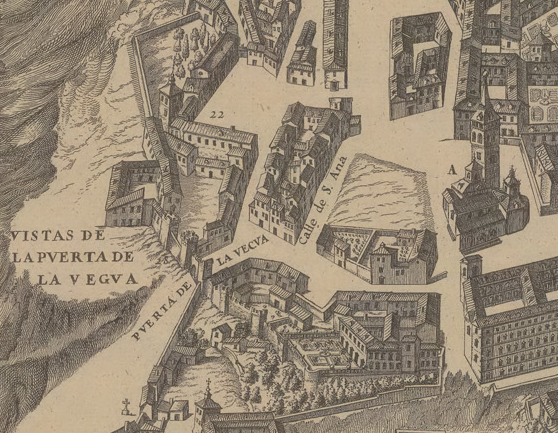 However, the origin of Madrid is Andalusian, as we already know. In fact, in 1656 the Puerta de la Vega, a wall canvas, and the church of Santa Maria (marked with the letter A on the map), which was the ancient grand mosque oriented towards Mecca in the southeast, were still standing in place at the time.

The Old Moorish quarter was located to the South, where the Muslim population, which was a minority in Christian medieval Madrid, was grouped. We can see a good painting of the Christian wall and the fountain of Caños Viejos (indicated with number 60 on the map), which could have once supplied water to the bathhouse and the mosque. 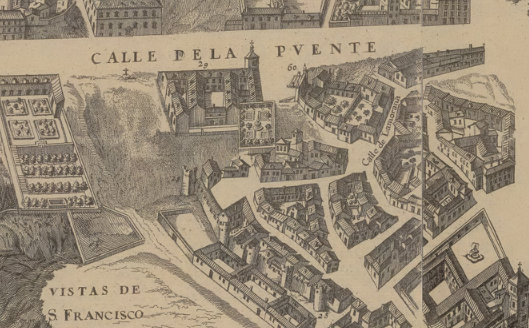 Let’s change now to Mancelli’s version of the city, which, as we can see at first glance, is less detailed. The name of the upper street varied between “Segovia”, “the Puente” and “the Puente Segoviana”. Originally it had been a stream and in Medieval times it was called “the Pozacho”. The place where the fountain was located is marked with number 33. 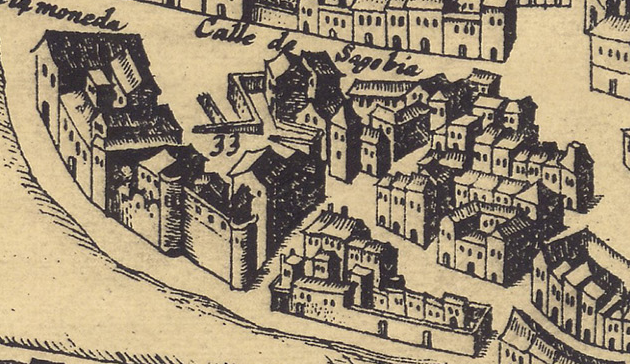 If we go East, we would enter the Cavas quarter, located between the parishes of San Andrés and San Pedro. As we can see, a good painting of the Christian wall was also preserved. It’s worth mentioning that this area had an important Moorish population in the 16th and 17th centuries. 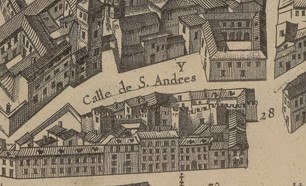 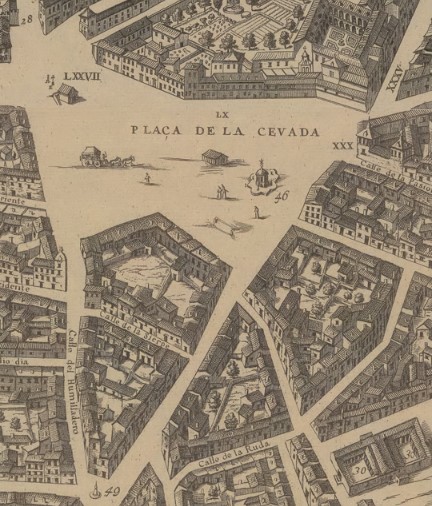 The Puerta de Moros (Moors Gate) had been at this point on the wall (marked with number 28 on the image), so-called precisely because of its proximity to the Old Moorish quarter and the Islamic cemetery. The gate disappeared at the beginning of the 15th century and was rebuilt in the 16th century, but when the maps were drawn it had already been demolished.

The Islamic cemetery is the oldest known in the “Villa de Madrid”. It was located within the area of the Plaza de la Cebada and Humilladero, and disappeared in 1502 when the practice of Islam was prohibited. Unfortunately, by the 16th century, it had already been urbanized. Sierpe street crosses the ancient cemetery. If you look at the following image closely, you will find a street named Ruda. Although it has not been proven, there is a theory surrounding this street, that considers that its name could come from the word Rawda, which in Arabic means cemetery. Allah ya’lam.

North of the Cebada is the monastery of Nuestra Señora de la Concepción de la Latina, a gothic work built by a Muslim builder. Master Haçan was the responsible for its construction. As a curiosity, we will add that, in 1502, he was baptized under the name of Gonzalo Fernández. The Books of Agreements of Madrid City Council register that the Muslim builders developed many of the houses of the quarter of El Rastro, very close from where we are. This was very common, as many late Medieval public works were ordered to Muslim builders. 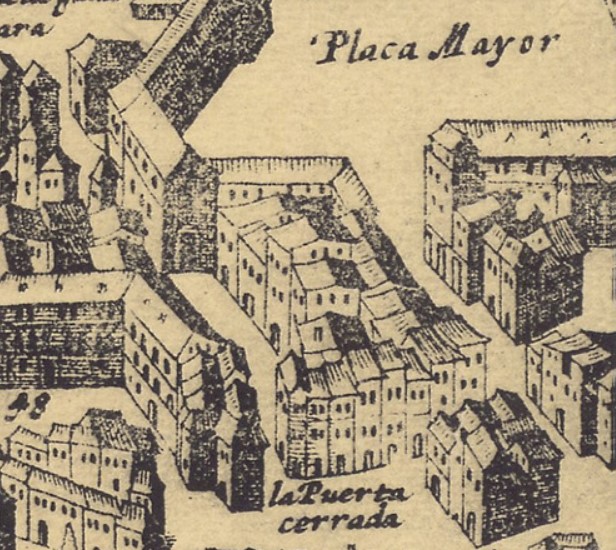 We will finish our tour, for now, in the New Moorish Quarter. This quarter, less defined, and built in the 15th century for Muslims who owned shops in Arrabal square, was later named the Plaza Mayor (the Main Square).