The 12th century is often described as a period marked by the Crusades, called by Popes Eugene III, Gregory VIII and Innocent III. However, this reductionist and Eurocentric vision ignores many examples of multiculturalism and interculturalism within the European continent, trying to impose a certain cultural and identity homogeneity. The examples of Al-Andalus and Sicily are certainly the most famous and representative. 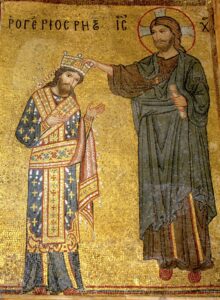 The diversity and multiculturalism of these societies have impregnated many aspects of daily life and, likewise, have left a cultural heritage of incalculable value. The harmony between Christians and Muslims in Sicily and their legacy, represented by one of the most important works of its time, the Book of Roger (Kitāb Rūŷar), written by al-Idrisi, are examples of this other history, based, not on confrontation, but on mutual enrichment.

Knowing the context of a piece of art or an object can give us an idea of the socio-political characteristics of the time and the society in which it was developed. It can also contain many moral and political lessons. For this reason, in this article we will delve into the history behind an object that, for its unique characteristics, illustrates perfectly the Sicilian society under the Norman king Roger II of Hauteville (1095-1154).

Roger II, a Norman king on the throne of Sicily

First, it is important to contextualize the situation in Sicily at this time.  In 1061, Roger de Hauteville and Robert Guiscard – respectively Roger II’s father and uncle – landed in Sicily and conquered the island that was then disputed by the Byzantine Empire, the Papacy and three Muslim emirates (Trapani, Palermo and Agrigento) who ruled the territory at the time. Gradually, on behalf of the papacy, the Normans consolidated their power and Roger of Hauteville was named Count of Sicily and ruled the island until his death in 1101. His first son, Simon, was the second count of Sicily until his death four years after his rise to power. His second son, Roger II, then ascended the throne in 1105.

Our story begins with his rise to power, and more precisely in 1130, when he abandoned his title of count and was named king of Sicily, a territory then characterized for being a cultural crossroads, at the confluence of the Roman, Greek, Byzantine and Muslim worlds.

On the day of his appointment by Pope Anacletus II, the king ordered the manufacture of a ceremonial mantle. It is this object – or rather this piece of art – that we want to analyze for this article.

A mantle of Mediterranean culture for a Christian King

Why should we talk about a ceremonial mantle when we want to talk about the contributions of multiculturalism? The answer is quite simple, and visual, since it is enough to look at it to appreciate at first sight the cross-cultural dimension of this object.

This story begins in the city of Palermo, more specifically in the palace of a Norman king of an island where languages, cultures, arts and religions had been intermingled for many decades. Thus, while much of Christian Europe was marked by the increasing persecution of Jews, Muslims and heretics, Sicily offered an alternative in which the presence of different communities was not perceived as a threat, but on the contrary, as a richness. A fact that we can well observe directly in this mantle. Therefore, it is not only an object of great beauty, but it is also fascinating to study because it is an authentic summary of the Mediterranean history of Sicily.

The impressive mantle of Roger II was made around 1134 in Palermo, in a state workshop located inside the royal palace, using different materials, different skills, different elements and symbols that are part of the visual culture of various regions of the Mediterranean.

It is a scarlet semicircle of kermes on silk, 345 cm wide and 146 cm long, embroidered with gold, pearls, precious stones and cloisonné enamel plates, which weighs about 54 kg.[1]

The first thing that interests us is the shape of this mantle. It is an ecclesiastical garment whose shape is that of a pluvial mantle, i.e. the type of mantle worn by bishops, archbishops or the pope during great ceremonies. This can be interpreted as a direct reference to the fact that Roger I (the father of Roger II) had received the status of Apostolic Legate (i.e., he had prerogatives that normally belonged to the pope) because he was one of his representatives in a foreign nation. 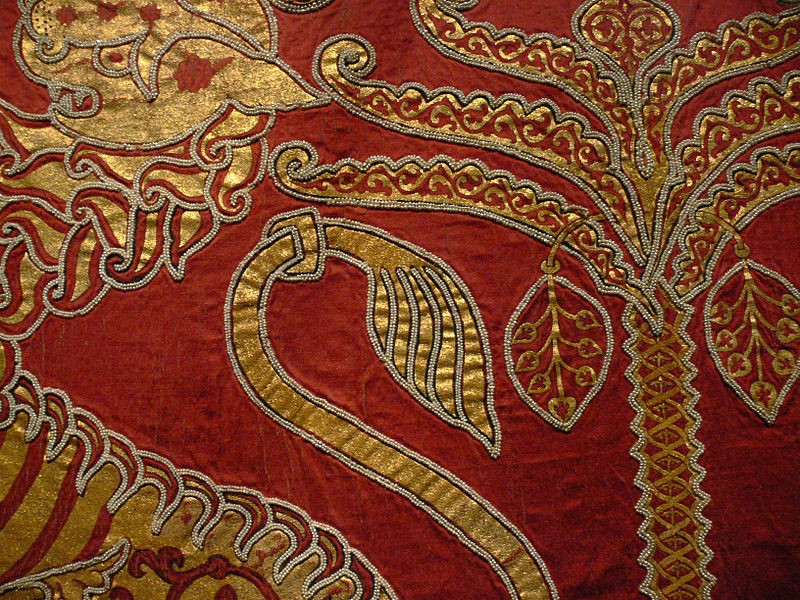 This religious dimension – of course, Christian – is also illustrated by the tree of life in the center of the cape, which separates two lions representing the political power of the king and his domination of the territory, symbolized by two camels.

These two animals have raised different interpretations according to which the camel could represent the Arab-Islamic world, while the lions would symbolize the Hautevilles, thus recalling their conquest of Muslim Sicily. Although studies agree that the design is an allegory of power, some emphasize the ruler’s domination of the people, while others see it as the triumph of the good ruler over the tyrant.[2]

However, this possible metaphor should not be seen as a single opposition between Christians and Muslims, on the contrary, several symbols testify to the interest and intermingling between different cultures and religions.

For example, the tree of life has a special characteristic through the introduction of foreign elements to the traditional Christian world. Relying on the Mediterranean symbolism, it is represented by a palm tree.

Likewise, the numerous pearls that outline each section of the embroidery of the mantle come from the Persian Gulf. They are a common decoration on Mediterranean fabrics, but were used and admired above all in the garments of the Byzantine Empire. Mantle cloisonné enamels are also attributed to the Byzantine Empire, as Byzantine craftsmen specialized in this type of work and decorative techniques were well known at this time.

Lastly, the gold embroideries were probably made by craftsmen from the Islamic world, due to the presence of the so-called tiraz bands (طراز). 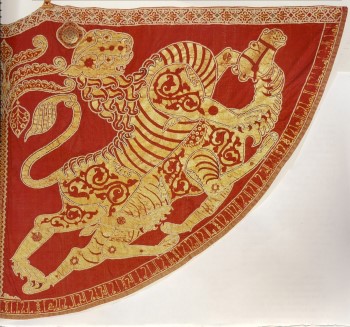 Indeed, the tiraz are medieval Islamic embroideries, in the form of armbands sewn onto tunics, and they were bestowed upon high-ranking officials who showed loyalty to the Caliphate. It was thanks to Al-Andalus and Sicily that the influence of the tiraz spread to European countries. The mantle of Roger II is a good example of this.[3]

This tiraz contains an inscription in kufic calligraphy, which, following the caliphal tradition, bestows blessings on the ruler. The translation of this inscription says:

“Here is what was created in the princely treasury, filled with luck, illustration, majesty, perfection, longanimity, superiority, welcome, prosperity, liberality, shine, pride, beauty, the achievement of desires and hopes, the pleasure of days and nights, without cease or change, with glory, devotion, preservation, protection, chance, salvation, victory and capability, in the capital of Sicily, in the year 528 H. [1133-1134] “.[4]

These inscriptions written in Arabic on the ceremonial mantle of a Christian king may come as a surprise, however, it is not a coincidence, but rather an illustration of the Sicilian society of the time.

These Arabic inscriptions, a symbol of Sicilian polyglossia

Indeed, the choice of an Arabic inscription is not unusual on an island where a large part of the population – including the palace craftsmen – spoke Arabic as a result of the rule of various Muslim emirates and dynasties from the 9th to the end of the 11th century.

The kufic calligraphy, which was used on the mantle was, in fact, very popular and in common use during the Kalbi dynasty (948-1053).

Sicilian society was in fact characterized at that time by its polyglossia, meaning that its inhabitants spoke not one, but several languages. The languages of 12th century Sicily were mainly Arabic, Greek, Latin and various Italian and Anglo-Norman dialects. Therefore, for the local population, the fact that the ruler decided to put an inscription in Arabic on his mantle was not extraordinary, since most of them understood and spoke this language.

A mantle symbolizing a political ideology

The choice of Arabic inscriptions also responded to political reasons. Indeed, it is important to note that the reign of Roger II corresponds to the return of Arabic as the language of power.

His father – Roger I Count of Sicily – imposed a hierarchy of languages characterized by the primacy of Greek, then Latin and, in an obsolete form, Arabic. Thus, the look was essentially directed towards Rome, and the decisions were oriented to please it. However, under Roger II the trend was different, and it was soon decided, for example, to reintroduce Arabic in acts of power.

The explanation for this change can be explained in part by the fact that Roger II wanted Sicily to stop being considered only as a vassal kingdom of the papacy. The desire to seek a broader legitimacy was translated into various political decisions, but also in more symbolic choices, such as the creation of this mantle of Fatimid inspiration.

The history of this mantle goes beyond the Sicily of Roger II. When Roger II’s grandson, Frederick II (1194 – 1250), regained the throne of Sicily and became emperor of the Holy Roman Empire from 1215 to 1250, he took the firm decision to be crowned with the majestic mantle of caliphal inspiration of his grandfather.

Later, the Holy Roman Emperors used it as a coronation robe, which is why it is nowadays preserved and visible in the Imperial Treasury (Kaiserliche Schatzkammer) of the city of Vienna.

To conclude, the mantle portrays a political understanding by which the presence of different cultures, languages and religions was not considered an element of risk to the royal power, which remained nevertheless Christian. On the contrary, this multiculturalism reinforced a legitimacy perceived as diverse and greater. A lesson for some leaders who today advocate a single ethno-cultural nationalism, closed to the others.