Abu Addullah Muhammad ibn Muhammad ibn Addallah ibn Idrisi (1099-1166) was the creator of one of the most famous cartographic works in History, the Kitab Ruyar, or the Book of Roger. But, actually, the work he is most known for is the Tabula Rogeriana, a collection of maps attached to the book that offers a geographical worldview very different to the one that we are used to in the West. 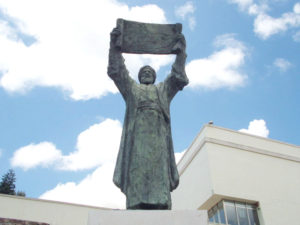 Al-Idrisi was born in Ceuta in the year 1099 to a noble family, which allowed him to travel all around the Middle East, as well as to study in Cordoba, one of the most important cities of Al-Andalus. During his period in the Peninsula, he travelled across most of its Southern areas, reaching Lisbon, in the Atlantic coast, and Valencia, in the Mediterranean. His long travels across these territories were gathered in a cartographic work that would go down in history. From his works, we also know that the places he knew the best were the regions of Murcia, Andalusia, and the Portuguese Algarve.

After spending his youth travelling across the Iberian Peninsula, king Roger II of Sicily (1095-1154) reached to him in the year 1140. This Norman count, who was proclaimed king by an Antipope in exchange of military support, devoted his time to expand his knowledge and military rule on the regions of the north of Africa and Greece. As part of this campaign, he asked the young al-Idrisi to develop a geographical compendium of the world, and an Atlas, a task to which al-Idrisi devoted fifteen years. During this time, he gathered geographical and cartographical information, both Arab and Christian, and sent emissaries to those places he could not reach to.

As part of this campaign, he asked the young al-Idrisi to develop a geographical compendium of the world, and an Atlas, a task to which al-Idrisi devoted fifteen years.

The result of his work was a manuscript titled Nuzhat al-mustaq fi’khtiraq al-afaq, or the Book of Roger. Attached to the book, there was a map of the known world, on a silver board. Both documents were presented to the king in 1154, shortly after his death, which could have been the end of al-Idrisi’s work. However, king Roger II’s son, William II, renew al-Idrisi’s contract, so he could continue working for Sicily, where he spent the rest of his days. It is worth mentioning that his work relies on many different sources, both written and cartographic, among them, the works of Ptolomeo, Orsoius, Mukadasi, or Ibn Hauqal. With regard to the Iberian Peninsula, he followed, especially, the famous 9th century chronicler from Cordoba, al-Razi.

The importance of water in the work of Al-Idrisi

Professor Ana I. Carrasco (University Complutense of Madrid), in her article “The perception of water and the hydraulic systems in the work of Al-Idrisi”, offers a detailed analysis of the importance of water, and everything related with this elements, in the work of this geographer. The article’s methodology focuses on “the analysis of language and the study of key concepts, as well as the frequency of their use and its contextual relation with other terms” (Carrasco, 1995).

In its Arabic version, there are many terms that belong or are related to the semantic field of water. The word “water” (ma’), in particular, appears 18 times in the text, and there is a total of 9 references to springs or fountains (‘uyun). We also find the terms “well” (abar), and water wheel (na‘ura or dawalib). With regard to gardens (yannat) and orchard (basatin), they appear 29 times, along with words such as irrigation canal, aqueduct, or reservoir. It is also remarkable the many references there are to actions related with water, such as irrigate or drink.

For al-Idrisi, water is a key element in everyday life. 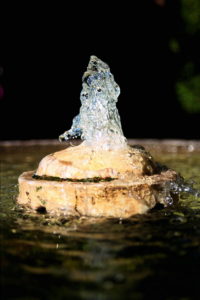 Through her analysis of linguistics, professor Carrasco concludes that, for al-Idrisi, water is a key element in everyday life. “The high frequency of occurrence of the term ma’ (water) in relation with the description of cities and other population means that, for the geographer, it is an issue of vital importance” (Carrasco, 1995). However, it seemed that al-Idrisi was more interested in the domestic consumption of water than in its agricultural use, given the scarce description of the irrigation systems. Finally, al-Idrisi’s interest in water is also reflected in the adjectives he uses to characterize it. The water that nurtures the land is always abundant (katir), sweet (latifa/hulw), salty (milh sabih) and warm (asjan).

Thus, thanks to past geographers and cartographers, and especially to the Andalusi studies that produced works as important as the Tabula Rogeriana (without forgetting the current historians and cartographers that work to recover these studies), we can understand how the world was in times of al-Idrisi, and how it was studied. This interest didn’t focus only on geography or humanistic issues, but it also shows an interest in the understanding of the hydraulic systems’ infrastructure of its time and previous periods.