I sometimes think about the glories of “Islamic Spain,” or Al-Andalus. Starting around 711 and ending in 1492, Muslim rulers maintained a spirit of convivencia, a Spanish term meaning “living in togetherness” or “coexistence”, which allowed for an unprecedented level of interfaith engagement on the European continent. While Al-Andalus may represent the pinnacle of cooperation among Muslims, Christians and Jews, there is also a brilliant history – too often ignored and still inadequately assessed – coming out of Sicily, an island belonging to modern-day Italy.

The unique society that developed in Sicily is hardly mentioned by historians of Europe, Christianity or Islam. Over the course of several centuries, interfaith exchanges in cultural, religious and scientific fields led to a hybrid culture stemming from Norman, Arab and Byzantine influences. For a time, Sicily was truly the crossroads between East and West, Islam and Christianity. The island was one of the rare bright spots of the Middle Ages.

Muslims are rarely associated with Italian history, but Islamic contact with Sicily began roughly twenty years after the death of Prophet Muhammad, during the caliphate of ‘Uthman. The governor of Syria at that time, Mu’awiya, sent a naval expedition to Sicily as an extension of the battles that were taking place in the east between Muslims and the Byzantine Empire. For about two-hundred years, Muslims made many efforts to control the island, then a Byzantine province. It was not until 827 that Muslims finally obtained a foothold by taking Mazara, on the western end of the island. The successful military expedition was launched from the North African Muslim province of Ifriqiya, or modern-day Tunisia. 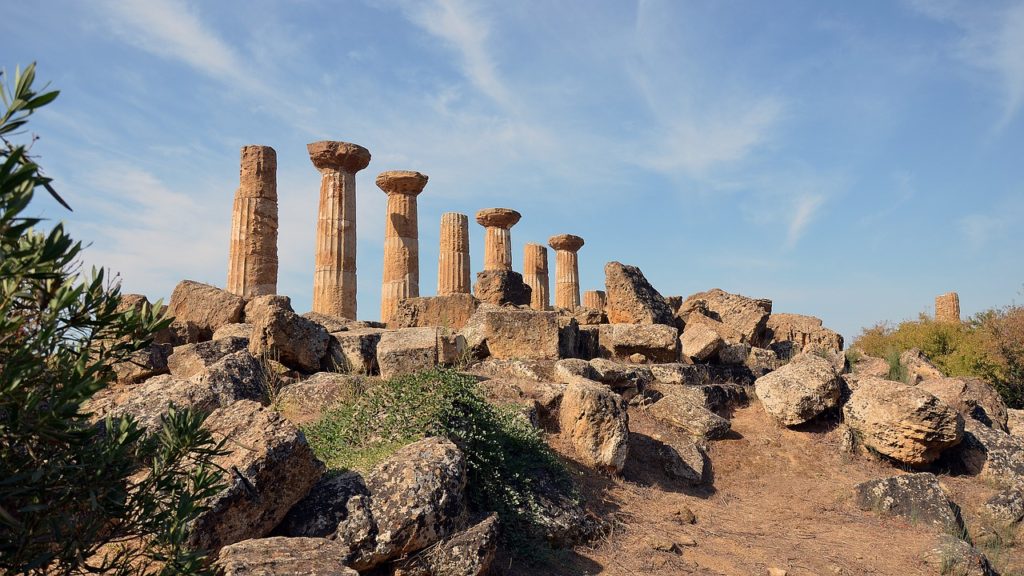 Unlike al-Andalus, Sicily did not fall to Muslims like ripe fruit. The Islamic takeover of the island took over seventy-five years. Once they secured Sicily, Muslims divided the island into three administrative districts, the names of which survive to this day. The first district, Val di Mazara, comprises the western coast. The Arab Muslims named the capital Palermo. The central region of Sicily – including the city of Syracuse – was given the name Val di Noto, while the remaining region (and the last to be conquered) was called Val Demone. The cities of Catania and Messina were located within this final district. The word “val” is derived from the Arabic word meaning “province”.

For a time, Sicily was truly the crossroads between East and West, Islam and Christianity. The island was one of the rare bright spots of the Middle Ages.

Three main Muslim dynasties ruled Sicily until 1071. The first to rule were the Sunni Aghlabids, an Ifriqiyan family that had broken away from the Abbasid caliphate based in Baghdad. Following the Aghlabids were the Shi’ite Fatimids, who drove out their predecessors in 909 and founded their Sicilian base of Mahdia in 916. The Fatimids eventually conquered Egypt in 969 and transferred the seat of the caliphate from Baghdad to the newly founded city of Cairo in 973. Fatimid emirs, or governors later ruled Ifriqiya and Sicily.

Much of the growth and expansion of Palermo was due to agricultural and technological innovations. Muslims introduced new crops including: cotton, hemp, date palms, sugar cane, mulberries and citrus fruits.

Under these Muslim dynasties, the population of Sicily grew rapidly and dozens of towns and cities were founded and repopulated including: Messina, Syracuse, Sciacca, Mazara and Castrogiovanni. The finest city in Sicily was Palermo, called al-Banurmu, or simply al-Medina, “the city”. Ibn Jubair, a geographer, traveler and poet from al-Andalus, described Palermo in glowing terms:

[Palermo] is endowed with two gifts, splendor and wealth. It contains all the real and imagined beauty that anyone could wish. Splendor and grace adorn the piazzas and the countryside; the streets and highways are wide, and the eye is dazzled by the beauty of its situation. It is a city full of marvels, with buildings similar to those of Cordoba, built of limestone. A permanent stream of water from four springs runs through the city. There are so many mosques that they are impossible to count. Most of them also serve as schools. The eye is dazzled by all this splendor.

Much of the growth and expansion of Palermo was due to agricultural and technological innovations. Muslims introduced new crops including: cotton, hemp, date palms, sugar cane, mulberries and citrus fruits. The cultivation of these crops were made possible by new irrigation techniques. These agricultural innovations spurned other industries including textiles, sugar manufacture, rope-making as well as silk and paper. 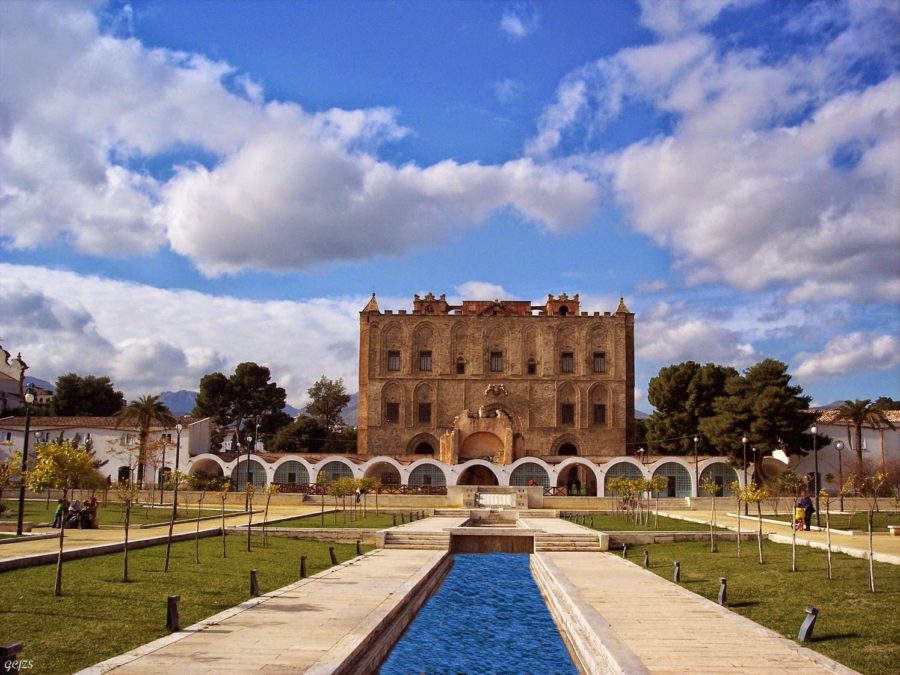 The Normans and Roger II

The first Normans arrived in Italy about the year 1000 while returning to mainland Europe from a pilgrimage to Jerusalem. The reason for their arrival had to do with Prince Guaimar III of Salerno, who requested help in defending his town against Muslims. After defending the town, a small contingent of Normans remained in Italy. In 1016, Norman Christians went for pilgrimage to the shrine of Saint Michael on Monte Gargano in Apulia. There they met Melus, also referred to in historical accounts as Ishmael, a leader of an anti-Byzantine rebellion in Bari. Melus asked the Normans to help him as he tried to free his town of Byzantine rule. Gradually, the Norman conquest took shape. 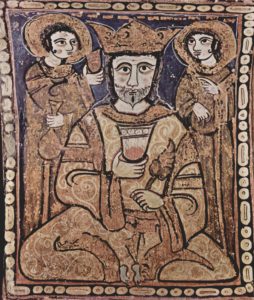 In 1061, a modest military force under the leadership of Robert Guiscard and Roger of Hauteville were paid by a Sicilian emir, Ibn al-Thumma, to assist Muslims in the civil war. At the time the island, which had a sizeable and rebellious Christian population, was split between three Arab emirs. The Normans eventually consolidated their power. In 1071, they captured the city of Palermo, and by 1091 the city of Noto and the island of Malta – the last Arab stronghold – were taken by the Norman Christians.

The most notable Norman ruler of Sicily is Roger II, a descendent of Christian knights whom previous Popes had recruited to fight Muslims in the Mediterranean region. Roger II ruled as King of Sicily from 1130 to 1154, and is considered by historians as one of the most successful rulers of 12th century Europe. He is said to have been a “product of the Mediterranean” in that he was born and bred in a cosmopolitan, multilingual world of Greek and Muslim tutors and secretaries that naturally created his hybrid identity. Roger II is also said to have spoken Arabic perfectly.

Roger requested the help of Muslim troops and Arab siege engines during his military campaigns in southern Italy. Once his troops had conquered new land, he would mobilize Arab architects to help Normans build monuments in a Norman-Arab-Byzantine style.

Artist techniques from the Islamic tradition were successfully incorporated to form the foundation of Arab-Norman art. The Church of Saint-John of the Hermits is one of the greatest examples of the fusion of Arab and Norman art. Built by Roger II between 1143 and 1148 in Palermo, the Church of Saint-John is famous for its red domes that show clearly the Arab artistic influence present in 12th century Sicilian society. In his Diary of an Idle Woman in Sicily, Frances Elliot described the Church as “totally oriental… it would fit well in Baghdad or Damascus”. Indeed, Giuseppe Bellafior, former Dean of Architectural History at the University of Palermo, also echoes such observations:

… the purely Norman element in Arabo-Norman architecture is less than the name might suggest. The Norman rulers had the tact and the foresight to accept, and even like, what they found. Yet they retained the tenuous links which they had with the land of their origin. The strength and efficiency of the Norman administration derived from its policy of deliberate flexibility toward the existing Muslim order on the island. Thus the culture in general, and artistic tradition in particular, owed little to the Norman’s own land of origin.

Roger II’s vision was multicultural long before multiculturalism became a fad in the “Western” world. The language of his court was French, but all royal edicts were written in the language of the people they were addressed to: Latin, Greek, Arabic and Hebrew. Astronomy, medicine, philosophy and mathematics were some of the subjects discussed in Roger’s palace; books were translated into various languages and became the standard textbooks in 12th century universities that were popping up around Europe.

Learning and the dissemination of knowledge were key components of Roger II’s Sicilian society. The most famous book of his reign – The Book of Roger (also known as Kitab Rudjdjar) – was written in Arabic by Muhammad al-Idrisi, an Arab Muslim geographer. Al-Idrisi was based at the court of Roger where he was charged with writing a book on geography and climate zones. The Book of Roger was monumental considering that al-Idrisi presented the world as a sphere and hinted at the concept of gravity. In a testament to the book, historian S.P. Scott commented, “For three centuries geographers copied his maps without alteration”. Roger II, unfortunately, never lived to see its publication; al-Idrisi’s work appeared several weeks after the great ruler of Sicily passed away in 1154.

King Roger was keen on using a range of cultural legacies in building a new Sicilian society. Muslim soldiers, poets and scientists played important roles in his court and palace. Arab agricultural and industrial techniques developed by Arabs over the previous two-hundred years were used to further develop Sicilian art, economy and culture.

These quests for knowledge – regardless of the cultural or religious tradition in which the knowledge arose – led to the founding of the University of Salerno in the 13th century. Salerno became the most famous medical school in the world, and it was there that Avicenna by Ibn Sina was translated into Latin. Salerno was also the location of the first scientific dissection, carried out by a Muslim.

Just as it was during centuries long ago, Sicily continues to show remarkable hybrid cultural elements. Even to this day one can see living traces of the past in Sicily. Place names such as Alcantra (from the Arabic word qantara, bridge) and Gibellina (from the Arabic word, jabal, mountain) are two such examples. Many street names are still recognizably Arabic, and in some cases not only the original name, but the function, has been preserved. The district of Lattarini in Palermo has harbored perfumers and grocers since the 9th century. The Arabs called this district suq al- ‘attarin, the market of the perfumers.

The Arab and Norman rule of Sicily punches far above its weight; it is one of the main centers of Christian-Muslim encounters in history. Pluralism flourished on this island during the Golden Age of Islam and during some of Europe’s darkest days. Sicily can no doubt remind us that East and West as well as Islam and Christianity are not mutually exclusive entities. Quite the opposite; they have fused together to create some of the greatest civilizations the world has ever known.