The hand of Fatima has become one of the most common symbols to produce jewels, accessories, and even tattoos in the Western world. Its origin can be found midway the History and the myth.

The popular hand of Fatima, or khamsa (five in Arabic, a reference to the hand’s five fingers) is a flat representation of an open hand, with the fingers extended. It frequently follows a streamlined design, in which the middle finger acts as an axe of symmetry, which makes it almost impossible to known if it is a right or left hand.

Although it is usually associated with the Muslim Arab culture, it is actually a pre-Islamic talisman, which already existed in the Punic religion and the Carthaginian culture, and was associated to the goddess Tanit. It is also deeply rooted in the Amazigh culture, where it is known as tafust. In Hebrew it is also called khamsa.

This popular amulet was already portrayed through different designs in the Middle Age. In the fine style of the Nazari vases, for instance, its surface went beyond the wrist and portrayed the forearm as well, dressed with wide sleeves. Likewise, the hand could be drawn with eyes inside it, stressing its talismanic importance, or even incorporate epigraphic inscriptions from the Quran.

This icon was a symbol of divine providence, generosity, hospitality, strength, or power among the Medieval Muslims, especially among the Shia community. It was considered an efficient amulet that expelled the evil spirits that caused diseases and brought misfortune, in addition to avoiding the evil eye.in fact, to carry talismans to prevent the evil eye was one of the many pre-Islamic practices adopted by the primitive Islamic culture and tolerated by its faith.

Although the ‘khamsa’ is usually associated with the Muslim Arab culture, it is actually a pre-Islamic talisman, which already existed in the Punic religion and the Carthaginian culture, and was associated to the goddess Tanit.

The efficiency of the talisman was linked with the magic power of the number five. As pointed out by René Guénon, the value of this number has traditionally been linked with the five letters of the name of Allah in Arabic. In addition to this, in the Sunni tradition, the hand is the synthesis of the law of the Prophet, as the five fingers are identified with the five pillars of Islam (the profession of faith, the prayers, alms, fasting and pilgrimage). At the same time, in the Shia tradition, it represents the five holy persons belonging to the family of the Prophet (Muhammad, Ali, Fatima, Hassan and Hussein).

Protection against the evil eye

The evil eye, or spell, is a belief extended all across the world, and it was already registered in Ancient Egypt and the ancient cultures of the Fertile Crescent. Romans also belief in this superstition, and called it “fascination” or “fascinum”. They transmitted it to the Medieval world. The Romans, as explained by Plato in the Timeo, believed that it was transferred through the projection of lightning or fire through the yes by contaminated souls. In the Islamic world, however, the evil eye was a result of envy, as explained by Ibn Khaldun.

Thanks to the cultural influence of the Low Middle Age, the use of the “Hand of Fatima” transcended the political borders and was adopted by the Christian and Jewish culture that were in contact with Islam. 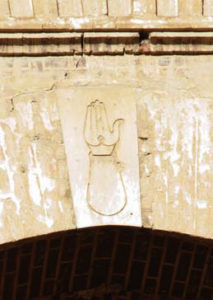 In the Quran, God registers and acknowledges the existence of the evil eye, and the Islamic traditions admit that the Prophet himself accepted the use of talismans, as long as they were based in the Quranic text. According to Tertullian, in the pre-Islamic Arabia, women protected themselves from the evil eye by covering themselves with a veil. Also, the eyes of some animals with assumed powers were used as amulets, as it was the case with the wolf, as well as some minerals or stones, such as the jet.

And yet, religious orthodoxy, especially in the Sunni tradition, doesn’t admit the use of this talismans, which they consider a polytheist and superstitious practice. For them, only Allah and the Quran can protect a person.

The khamsa is usally called the “hand of Fatima”. There are several theories that explain this name. The origin of this expression is frequently credited to the Europeans living in the north of Africa during the Protectorate, especially the French soldiers who usually referred to all Tunisian and Algerian women, disdainfully, as Fatima. 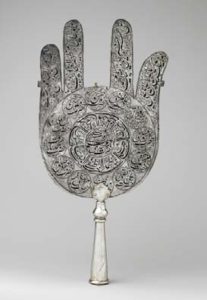 More recent studies, without rejecting this theory, consider it is related with Fatima Al-Zahra (606-632), the favourtie favourite daughter of Prophet Muhammad. There is not any reference throughout her life that might suggest this link, although the many legends she has been linked with constantly refer to her motherly and protective nature, which could be an explanation for the khamsa talisman.

Other authors such as A. Matrot or Probst-Biraben tell the tale (historically unfounded) of the battle of El Bedr Hanin (624 H.), that solidified the strength of the Prophet, during which his army lack of an emblem or flag, so they assigned this task to Fatima, the commander’s favourite daughter, who wet her hand on the blood of a soldier and printed it on her veil.

The spreading of the symbol

Thanks to the cultural influence of the Low Middle Age, its use transcended the political borders and was adopted by the Christian and Jewish culture that were in contact with Islam. Among the many religious and cultural non-Muslim traditions that have adopted this symbol, we find the Sephardic Jews, which have frequently used the symbol of the spread hand as an amulet to save their homes and people. 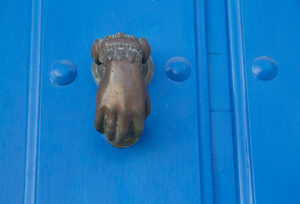 It has continued to be used as a protective amulet within the Muslim world or in those regions with a Muslim past, where we may find it on doors, houses, and also garnishing jewels or the traditional metalwork. There are thousands of examples from the Iberian Peninsula -especially as a knocker in the doors of certains houses-, and the north of Africa to Palestine, as well as the south of Italy, particularly in the region of Naples.

Today, the symbol is known all across the world as a result of globalization, and it is very common to find it in Western culture, in necklaces and bracelets.