Both databases reflect FUNCI’s work to promote and bring knowledge on the history and relations of the Mediterranean region, from the Andalusian period that began in the 8th century to the present day. The initiatives are framed in the firm belief that the dissemination of knowledge about the interdependence and interrelationship that has historically existed between the countries of the southern and northern shores of the Mediterranean can contribute to the promotion of open multicultural societies, and break down many of the prejudices that exist between the two shores.

Both databases reflect FUNCI’s work to promote and bring knowledge on the history and relations of the Mediterranean region, from the Andalusian period that began in the 8th century to the present day.

Within this framework, the Benumeya Database offers an extensive catalog of works that have focused on relations between Spain and the southern shore of the Mediterranean, with a special focus on relations between Spain and Morocco. For its part, the Database of Bibliographic Resources on Islamic Madrid offers a more specific content, which aims to compile all academic and informative initiatives focused on the study of the historical past of the Madrid region, from its foundation in the 9th century to the modern era.

Benumeya Database of Bibliography on North Africa and Al-Andalus 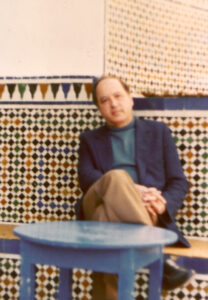 The Benumeya Database is based on the remarkable efforts of Arabist Rodolfo Gil-Benumeya Grimau (1931-2008). Gil-Benumeya Grimau, son of the famous Andalusian activist Rodolfo Gil Benumeya (1901-1975), was a doctor in Philology (specializing in Arabic and Islam) from the Autonomous University of Madrid, and director of the Spanish Cultural Centers in Cairo, Rabat and Tetouan, as well as professor at the universities of Rabat and Cairo.

At the end of the 1970s and with funding of the Spanish Embassy in Morocco, he led his first bibliographic compilation project under the name of “Aproximación a una bibliografía española sobre el norte de África, 1850-1980” (Approach to a Spanish bibliography on North Africa, 1850-1980). The work was published in 1982 (and reprinted in 1986) by the General Directorate of Cultural Relations of the Ministry of Foreign Affairs.

The Benumeya Database is based on the remarkable efforts of Arabist Rodolfo Gil-Benumeya Grimau (1931-2008).

Subsequently, the project was continued alone by the author, whose work would lead to the basis “Aproximación a una Bibliografía Española sobre el Norte de África y Al-Ándalus (ABESNA)” (Approach to a Spanish Bibliography on the North of Africa and Al-Andalus), initially published in a digital version by the Junta de Andalucía, and covering works published up to 2005. Its objective was to systematize the knowledge on the historical relations between the Iberian Peninsula and the southern shore of the Mediterranean, with the aim of creating a useful tool for multidisciplinary research, which, at the same time, would reflect the intensity of the existing relations and the vast knowledge produced about them.

In short, it is a database that gathers more than 38,000 references of works produced in Spain or in the territories under its dependence (such as the Spanish Protectorate in Morocco) on North Africa and Al-Andalus, from the mid-19th century to the year 2005.

It is a database that gathers more than 38,000 references of works produced in Spain or in the territories under its dependence (such as the Spanish Protectorate in Morocco) on North Africa and Al-Andalus, from the mid-19th century to the year 2005.

The rights for the manipulation and exploitation of this database were granted to FUNCI last 2020, offering this institution the opportunity to continue this excellent work, and complete it with the works produced to date, to turn it into a living and dynamic database that can be expanded indefinitely in the future.

Bibliographic Resource Base on Islamic Madrid

For its part, the Bibliographic Resource Base on Islamic Madrid was launched in 2020, after two years of bibliographic compilation and classification work, as part of the work developed within the framework of the Center for Studies on Islamic Madrid (CEMI), created by FUNCI in 2017. In line with the work and objectives of CEMI, the database aims to compile all publications and materials whose content deals with Islamic Madrid (Andalusian, Mudejar and Moorish), of academic content (scientific journals, books, theses, congresses…), informative content (books or journals), or audiovisual and archival material. Its objective is to centralize and facilitate access to this knowledge to the interested public. Today, the database has approximately 600 records.

The project is part of CEMI’s goal to preserve and disseminate the origins of Madrid and, specifically, the research and promotion of the Islamic legacy of Madrid and its region (Andalusian, Mudejar and Moorish). This purpose is pursued through scientific promotion, heritage protection and dissemination of this heritage and the history and knowledge surrounding it. Through this recovery and reappropriation of the history and tangible and intangible heritage of Madrid, CEMI aspires to contribute to the construction of a diverse, multicultural and respectful society in Madrid.

In addition to this database, the digital platform developed by CEMI compiles and facilitates access to other useful resources for the search of information about the Spanish capital, such as the different archives and digital databases with historical information about the region, cartographic resources, or library catalogs and newspaper libraries.

Both databases are conceived as living and dynamic sources that are constantly being updated. They are thus approached as an indefinite work carried out by the Islamic Culture Foundation with the purpose of maintaining the reference status of both bibliographic databases and demonstrating, above all, that this interest and work of scientific and informative production is not only limited to the past, but prevails today.