In FUNCI, we want to congratulate our friend and collaborator, the archaeologist Manuel Retuerce, member of CEMI, and all his team, for their wonderful discovery at the archaeological site of Calatrava La Vieja, in the province of Guadalajara (Spain). It is the biggest Middle Age arsenal found.

The city of Calatrava (from the Arabic Qal’at Rabah), currently known as Calatrava La Vieja, is, today, an important archaeological site open to the public. It delights the visitors daily, once they discover the scale of the history and importance of the place. Calatrava was a defensive citadel founded during the Uamyyad times, around 785, in the left shore of the Guadiana river. Not in vain it is the birthplace of the saying “to appear and disappear as the eyes of the Guadiana” (in the Spanish original, aparecer y desaparecer como los ojos del Guadiana). The fact that the site is located far from other urban centers has avoided its pillage and helped to the preservation of material remains underground, in a relative good condition and in abundance. Thus, since the beginning o the archaeological campaigns in 1984, remains and structures from the Bronze and Iberian Age, as well as a lot of material from the Islamic period and the Middle Age.

It also had a primary role as a mediator on the confrontation between the Muladis from Toledo and Cordoba, as well as during the Berber and Khariyyi revolts. 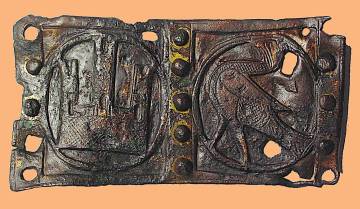 The Calatrava’s strategical importance, due to its location at a crossroads in the South subplateau, made it the perfect enclave to defend both Cordoba and the plateau from the attacks coming from the North. It also had a key role as mediator on the confrontation between the Muladis from Toledo and Cordoba, as well as during the Berber and Khariyyi revolts, who demanded for the governors to return to religious “purity”. For these reasons, the city had a strong wall, with 44 albarrana towers, and a defensive moat circling the city. In addition to this, and in order to attend its large population, it had a complex system of water supply, as well as an alcazar (Moorish palace), a medina with its hammams (baths), its furnaces and homes, and a series of extra wall suburbs.

Tactics of war and battles

But this prosperity could not last forever. After several battles between the Almoravid power and Alfonso VII’s troops, the city felt under Christian hands during the Almohad period. In 1212 took place the definitive conquest of Qanat Rabah by Alfonso VIII of Castille. At the same time, he was preparing, along with Sancho VII of Navarre and Pedro I of Aragon, to defeat Muhammad an-Nasir’s army in the bloody battle of Las Navas de Tolosa, which would put an end to the Muslim supremacy of Al-Andalus.

However , nothing allowed to foresee the final victory of the Christian troops, not only due to their numerical disadvantage, but also to the speed of the Andalusia horses, the lightness of their armors, and their tactics of war.

This is how the Andalusia scholar Al-Turtusi (11th and 12th century) described their war tactics: 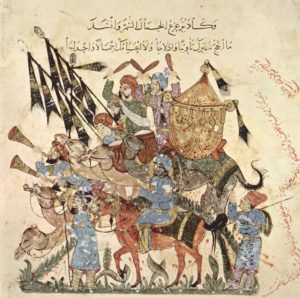 there is an excellent tactic we have in our country, and it is the most efficient of all the ones we have put into practice in the war against your enemies: it consists in placing first the infantry, with big shields, long spears and sharp and piercing darts. The infantry is placed in lines, sticking the spears in the ground pointing their enemies, sinking their knees, while the archers lead forward, with their arrows piercing through the coats of mail, behind the cavalry. When the Christians charge against the Muslims, the infantry rests still, instead of standing up. Thus, the enemies approaching are received by the archer’s arrows and the infantry’s darts, while the spears receive those [who managed reach them]. Then, they turn left [some] and right [others] so that the Muslim cavalry passes through them, thus, achieving everything that God willed.”

Nothing allowed to foresee the final victory of the Christian troops, not only due to their numerical disadvantage, but also to the speed of the Andalusia horses, the lightness of their armors, and their tactics of war.

The battle at Las Navas de Tolosa was the final defeat of An-Nasir’s army, and the conversion of Qanat Rabah to a Christian stronghold, linked to the Order of Calatrava. According to the History scholar Alejandro Floristán, the Christian assault took place through a triple attack which relied on three simultaneous groups of archers. The archers acted from ground level, sending rows of arrows, some of them poisoned or in flames, to defeat their enemy. Then went the crossbowmen, attacking with precision and rotundity. 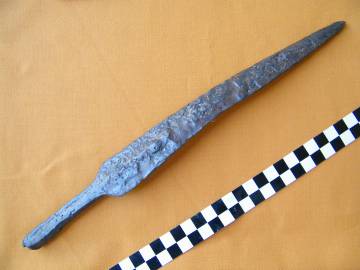 These weapons, and many more, have been found by a team of archaeologists leadered by Manuel Retuerce, from the University Complutense of Madrid, and Miguel Ángel Hervás, through different campaigns. It is considered to be the biggest medieval arsenal ever discovered. Among the weapons found, there are crossbows, swords, spearheads, darts, arrows, assegais, and arrow heads. According to Alejandro Floristán, more than 20,000 metal objects have been found, most of them projectiles. The prior excavation campaigns had allowed to find many remains of domestic use, such as ceramic items, glass, and metal pieces, some of them Christian.

This campaigns had begun in the mid-60s with the reconstruction activities carried out by Santiago Camacho and Manuel Fisac.

A long history of archaeological excavations, for a fabulous settlement in the middle of the Castilian plains.