In 2012, music in Mali hit the headlines due to the terrorist group Ansar Dine’s (a group linked to Al-Qaeda) decision to forbid music in the country and the repression campaign launched against all artistic expression. Its statement took place in a context of civil war and its control of the north of Mali, which would eventually result in an international military intervention, led by France.

However, music has already occupied a prominent place in the country. Since the expansion of the Mali Empire, in the 13th century, to the current times, Mali has been an international reference for African music, both traditional and contemporary. Today, there are many international renowned artists playing across the globe. Artists such as Saif Keita, Amadou and Mariam, Rokia Traoré, Fatoumata Diawaré, the group Tinariwen, or the late and influential guitarist Ali Farka Touré, are all internationally acclaimed. Their music is a fusion of the region’s traditional music with contemporary elements, in which blues (“desert blues”, as Tinariwen called it) holds an essential role.

The importance of music in Mali dates back to the creation of the Mali Empire in the 13th century, which occupied a large extension of the Western Subsaharian Africa, and to the tradition of the griots or jinel.

The Mali Empire was funded by Sundiata Keita in the 13th century. For the next century, its successors extended the territory across the region, unifying its tribes under their leadership and establishing a complex and efficient political and economic system. The Empire reached its peak in the 14th century, under the authority of Mansa Musa, known for its wealth and gold reserves, and then began a slow decline that ended with the collapse of the Empire in the 17th century. 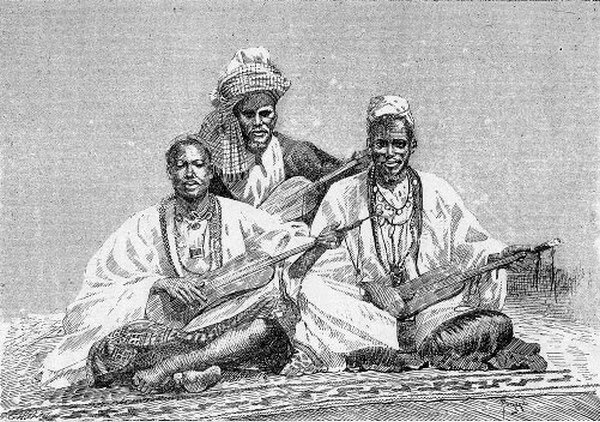 Returning to this article’s subject, during this period,the griots or jeli (in the original language) reached a remarkable importance as counsellors of the Emperor. The griots were a sort of troubadours, poets, storytellers and singers, in charge of preserving the tribe’s memory, through stories, tales, legends, and the preservation of oral tradition. During the times of the Empire, they became counsellors to the emperor, providing advice, reflections, and opinions based in their wide knowledge on oral tradition. In addition to their political role, the griots acquired different social functions, playing at ceremonies, weddings, births, or other gatherings of social relevance. Its stories usually combined entertaining passages with educational and moral elements.

The importance reached by the griots, who mastered music through the use of traditional instruments such as the balafon (similar to a xylophone), the kora or the ngoni (both string instruments close to the lute), has survived up to these days. They have preserved its primal social role, and reached a visibility that transcends national borders.

The situation faced by Mali musicians these days is not easy. In a country shattered by political instability, and armed and sectarian conflicts, many of these artists have been forced to flee from their homes and emigrate abroad. And yet, the international reputation they have attained has turned them into cultural referents for Mali, and spokespeople for the problems the country (or even the continent) is facing.

The number of international renowned musicians of Malian origin has reached such a number that it is difficult to offer a coherent account of them all, nor can we expect it to be comprehensive. Arbitrarily, we can speak first of Ali farka Touré (1939-2006), for the influence he has had on blues music in Mali. Reaching international recognition after signing with an American label in the 80s, Ali Farka Touré, original from the region of Timbuktu (in the North of Mali), sang frequently about its land and the importance of preserving its traditions. He mastered a style that evoked the slow and lonely rhythm of the desert. As he famously stated when speaking about his music style:

“I do traditional music. The concept of blues is good for Europe, but not for me. What you consider blues is a hundred percent African; it is the branches and the leaves of African music.”

Likewise, it is not possible to talk about music in Mali without highlighting the work of Amadou and Mariam, two of the main referents of Afro Blues, with a wide international career and a long list of collaborations with African and European artists, such as Manu Charo, Kn’aan, or Damon Albarn (Blur, Gorillaz).

Following the trail of these artists, new renowned artists have contributed to popularize Mali’s blues, such as Tirawinen or Songhoy Blues. The members of Tirawinen all belong to the Tuareg tribe, a traditionally nomadic tribe that extends across the Saharan desert, and are present, mainly, in Mali, Niger, Libya, Algeria, and Burkina Faso. The band sings in tamashek, the main language of the Tuareg people, and many of their songs speak of the frustration of a nomad life limited by national frontiers, surrounded by war conflicts, and in constant movement (an idea gathered under the notion of assouf or nostalgia).

As for Songhoy Blues, also Tuaregs from the north of Mali, they met after the prohibition of music in 2012. Exiled in Bamako, the capital of Mali, they decided to form a group and publish their first work with strong protest connotations, “Music in exile”. As they stated when explaining their work:

“The most important message is the music has to be an element of union, or reconciliation, of peace and love, no matter the culture, language or religion. We want people to smile when they listen to our music, we want them to enjoy it.”

The importance of women in music

We cannot speak about the country’s music without referring to the large production of female artists. In fact, traditionally, women used to be the lead singers, while men played the instrumental parts. These roles have only recently changed.

Fatoumata Diawara and Rokia Traoré have both become young international references of Malian music, combining contemporary music with the country’s traditional elements and sounds. We can also highlight, of course, other traditional singers such as Nahawa Doumbia, Djeneba Kouyate, Oumou Sangaré, or Mamani Keita. Many of them, such as Oumou Sangaré and Fatoumata Diawara, have become prominent spokeswomen for their country and active advocators of women rights. Through their music, they have faced terrorism, reported the humanitarian conditions faced by the country’s population, the limits imposed by other countries, and the risks faced by the emigrant population (a good example is Faoutamata Diawara’s song “Clandestin”,, underneath), in addition to reporting and defending a transformation of traditional roles between men and women.

For instance, Sangaré’s activism for women rights, against gender violence and forced marriages, and singing for the women empowerment, has been awarded with the international music prize by UNESCO in 2001, and by naming her an ambassador for FAO in 2003.

A united musical front against radicalism

In spite of the risks they face, Malian artists have managed to keep their culture alive and to reject all radicalisms. Moreover, they have shown the importance of music as a vehicle of social and cultural union, above ethnical and religious differences. Music has, thus, become a tool for tolerance and coexistence, in addition to becoming an essential example of the country’s cultural heritage.

In 2016 and 2017, the two first editions of the Festival Acoustik Bamako (FAB) were organized. They have been the biggest challenges to those attempts to suppress culture. There have also been important initiatives from the world of music, to promote Mali’s music and its main icons, through projects such as Africa Express or the world music label Putumayo World Music.

To finish this quick overview on this important cultural and artistic expression, we present underneath the documentary “They will have to kill us first”, that pictures the impact of 2012’s forbidding of music, and the efforts of Mali’s artists to confront and survive the war and religious conflict that has taken over the country.