Aramco World magazine reproduces an excerpt from the book All the Lands Were Sea, by the photojournalist Tor Eigland. Eigland has been a frequent contributor to the magazine, and is an experimented traveler. In this book, he recalls through narrative and images his travel to the marsh of Iraq. You can find his book here. 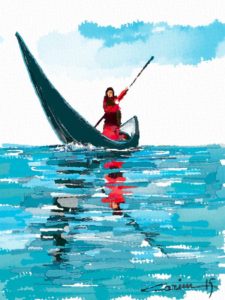 Marshes once occupied 20,000 square kilometers (7700 sq mi) of southern Iraq, and in October and November of 1967 I had the good fortune to spend more than a month there, in what was then one of the most unspoiled parts of the world. At times it seems hard to believe, but today’s Iraq was once the center of the Eurasian universe. Mesopotamia and Sumeria were cradles of civilization, developed here thousands of years ago.

Mesopotamia means “the land between the rivers,” and the rivers are the Tigris and the Euphrates. Within their confluence lay vast marshlands with lakes, channels and rivers, islands, forests and vast beds of tall reeds, some three and even four times the height of a person. Some say the Garden of Eden was here.

Beyond the marshlands, along its edges, there are still visible traces of Sumerian cities like Uruk, Ur and Larsa. Those civilizations died and vanished—with one exception: Within the Marshes lived people calling themselves Ma‘dan, which loosely means “plains dwellers”; they are commonly known in English as Marsh Arabs.

Mesopotamia means “the land between the rivers,” and the rivers are the Tigris and the Euphrates.

Although they speak dialects of Arabic, many of the Ma‘dan may well be direct descendants of the Sumerians. The estimates of their numbers at the time of my visit ranged from 250,000 to 500,000. 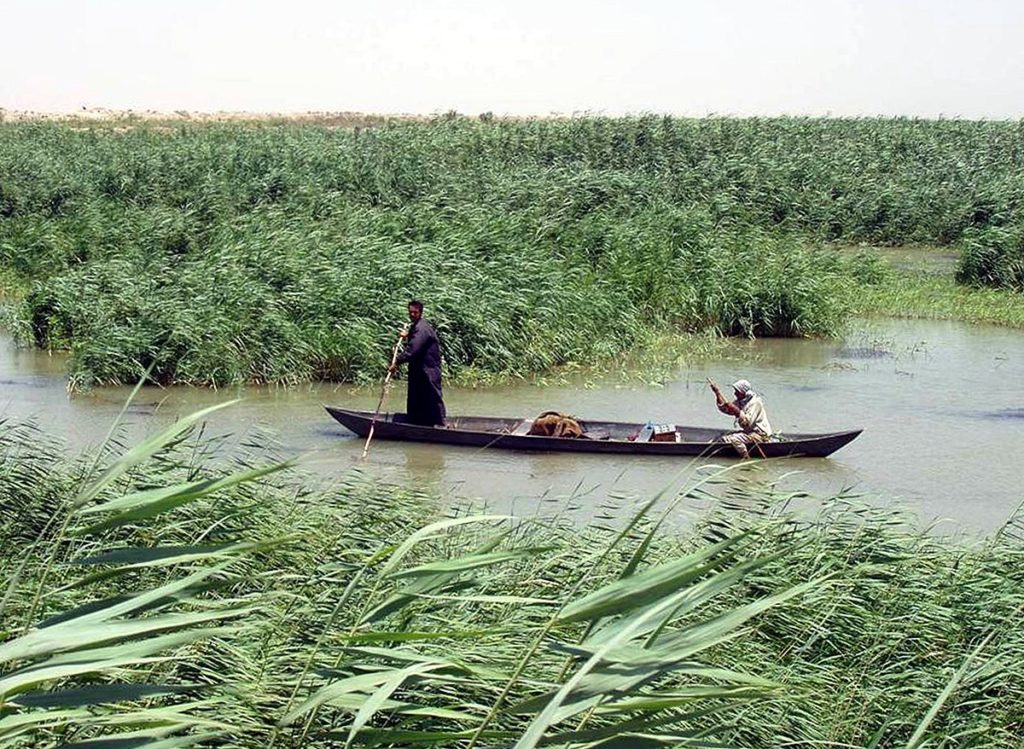 Since I had heard that the last western writer to be allowed to visit the Marshes was Wilfred Thesiger—author of the masterpieces Marsh Arabs and Arabian Sands—back in the 1950’s, I expected that official permission to go there would be hard to obtain. Indeed, it took three weeks, and the necessary papers were ultimately issued thanks to the intervention of the mayor of Baghdad himself. The Iraqi government was already threatening to drain the Marshes, thereby extinguishing an ancient way of life. This added to the strength of my desire to go there.

My original plan was to paddle off with a guide, in a large, marsh-type canoe, from the little trading village of Majar al-Kabir. To keep everything simple, I had hoped to limit the cargo to myself, a guide, my cameras, two shotguns and—in case I tired of the local diet—200 tins of nutritious Norwegian sardines which, inexplicably, I found in a local grocery shop.

The authorities, however, insisted that I take an armed soldier along—for protection, they said. I knew that the Ma‘dan loathed anything that looked like government authority, and I knew the soldier could make it harder for me to do my work.

The canoe had to be changed for a flat-bottomed motorboat, which came with a boatman-guide-interpreter, Ibrahim, who had grown up in the Marshes and learned English in an American-owned sugar factory. Our soldier turned out to be well on in years, with a kindly wrinkled face and a nearly antique rifle. In his motley brown uniform, he was hardly a ferocious sight.

The authorities, however, insisted that I take an armed soldier along—for protection, they said. I knew that the Ma‘dan loathed anything that looked like government authority, and I knew the soldier could make it harder for me to do my work.

Ibrahim at this point mentioned that he might want an assistant boatman, but I cut him off by telling him that, if so, I wanted an assistant cameraman as well—and perhaps the old soldier should have a sub-soldier…. Fortunately, that made him roar with laughter, and on that note, we sputtered out of Majar al-Kabir and headed south down the muddy river toward the marshes. 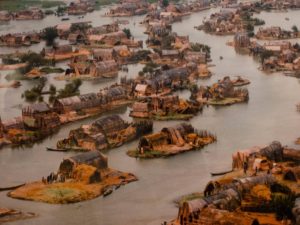 Since it was a beautiful, cool, early spring morning, and since I thought I had left the frustrations of Iraqi officialdom behind, I finally felt happy and was looking forward to adventures to come.

The euphoria was not to last. Barely a few moments later, we spotted a cloud of dust behind us on the riverbank and saw a Jeep chasing wildly in our direction, the driver leaning on its horn. A man in the Jeep stood up, waving frantically. We pulled over to the bank and waited.

The Jeep stopped, and a youngish, swarthy man jumped out. He was dressed in a cheap-looking black suit, white shirt, black tie and black polished shoes. Without hesitation, explanation or apology, he said, “Salaam alaykum,” boarded our boat, sat down and lit a cigarette.

I stared at him, speechless. The man was wearing the informal uniform of the dreaded Iraqi secret police, including the pistol bulge under his jacket. Just as obviously, he was joining us. I knew it was useless, but to make myself feel better I feigned a burst of fury. Ibrahim shrugged and whispered to me: “When we get to the villages, we’ll park them on the islands, give them cigarettes to smoke and food, then get our own canoe and we can do your work.”

Ibrahim’s solution would prove workable, and I should add that after the initial high tensions, the policeman actually warmed up, became almost friendly and left me alone to do my stuff.

By the time our little regiment settled down and got somewhat acquainted, we had left the muddy river and entered a narrow, deep, clear waterway surrounded on both sides by towering reeds, some as tall as seven or eight meters (23–26′). Everyone fell silent. We had entered the marshlands.

At first, the chugging of the engine and the shrieks of unseen birds were the only sounds. Then, a bit further on we spotted a number of graceful canoes darting in and out of the reeds. These were the first Ma‘dan we saw. They were busy collecting reeds and picking edible plants, and some were spearfishing.

Soon, in some odd way, word of what we were flew on birds’ wings ahead of us. When people realized that this was a photographic expedition for a foreigner and not a police raiding party, they no longer slipped away.

A few, however, turned their boats and slipped away as soon as they spotted the uniform among us—afraid, apparently, that we might be out to enforce Iraq’s compulsory two-year military service law.

Soon, in some odd way, word of what we were flew on birds’ wings ahead of us. When people realized that this was a photographic expedition for a foreigner and not a police raiding party, they no longer slipped away.

The canal widened, and we entered a lagoon. On its right side I saw the reed huts of a village, Al-Sahein. We waited on the outskirts to give the headman time to get organized to receive us. That is the custom in these parts, Ibrahim told me.