A Spanish-Germany archaeological team has found, in a new excavated area, a big administrative building close to the Plaza de Armas, in the Caliphal palace of Medina Azahara (Spain).

First arrived the Berbers with their firebrands lit and set the palatial city on fire in 1010. The wooden roofs cracked by the heat and the tiles were the first to fall. The walls were left unprotected and collapsed as well. Then arrived the raiders to take the big and precious sandstones and all objects of value that could still be found among its rests. A thousand and eight years later, experts from the German Archaeological Institute, the Regional Government of Andalusia and the University Autónoma of Madrid are studying the dramatic destruction of the Plaza de Armas of the Caliph’s palace. Next to it, as advanced today by the Spanish newspaper EL PAÍS, they have discovered a huge administrative building, of two floors, that might have been the police quarters of Medina Azahara, the Arab palatial complex (10th century) best preserved, and named a World Heritage Site last July, 2018. 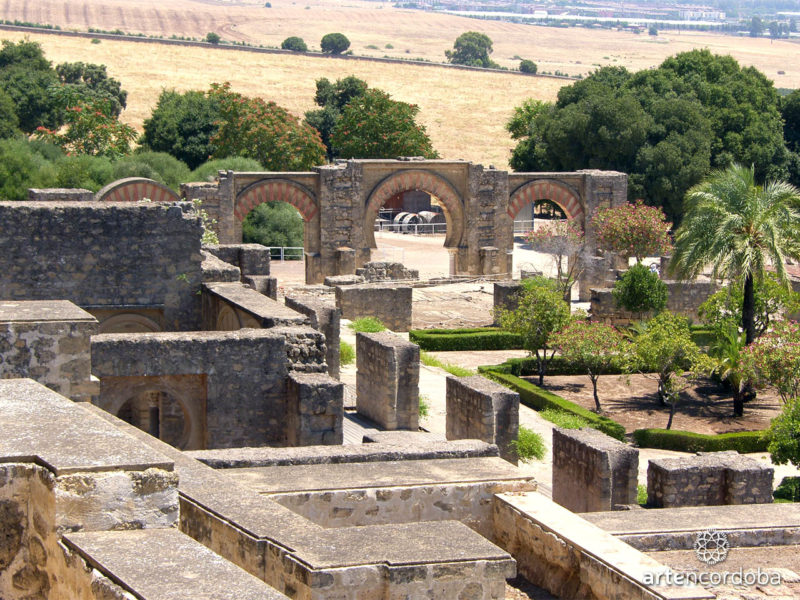 The Umayyad Caliph Abderrahman III ordered the construction of Medina Azahara (the shining city or city of the flower) in the first third of the 10th century, 8 km from Cordoba, as a symbol of his power. Its design, broadly speaking, is a horizontal rectangle (of more than 100 hectares), in whose upper area would be the palatial city, with gardens in the middle and its side areas reserved for the population. It was destroyed completely one century after its foundation, due to the civil wars that were taking place at the time, and the pillage it was subject to during the Middle Age, for the construction of other Christian and Arab buildings. Having been built by using easily carved stones, its big blocks were very precious to constructor, who could transform them into romanic or gothic pillars.

It wasn’t until Alfonso XIII’s reign that the ruins began to be studied.The archaeological excavation works began after the Spanish Civil War. Only a 10% of the site has been unearthed so far.

“There is work enough for our sons, our nieces, and their sons”, explains Alberto Canto, full professor at the Department of Prehistory and Archaeology of the University Autónoma of Madrid, and director of the Excavation. Canto is one of the ten integrants of the Spanish-German team inc charge of the first great incursion to the east of the Palace.

The finding of a new building

The project, with a budget of 200,000 Euros in 2017, was looking for the missing Plaza de Armas (of about 10,000 m2), contiguous to the palatial complex. The experts had five years to complete their research. But last June, they found a big structure of 1,500 m2 to the east of the terrace, with two floors and three naves. It was, most certainly, an administrative building belonging to the palatial complex. The first hypothesis seem to indicate that it could be the Caliph’s police quarters or “the offices of a lord from the medina”, explains the team. “It is an area that had never been excavated. So far, we have found the walls, the pillars of a portico, and different constructive elements, such as the roof tiles, the first one that fell after the destruction of the building”, adds Canto.

Specialists have confirmed that it was an administrative building, as it lacks rooms or latrines. It has, instead, a reception area, and three naves. It is likely that the structure was porticoed. In fact, the slabs, the wall bases, and even fragments of the walls can be seen at plain sight. The slabs are the same used in other administrative buildings of the Palace.

“It was, most certainly, an administrative building belonging to the palatial complex. The first hypothesis seem to indicate that it could be the Caliph’s police quarters or “the offices of a lord from the medina. It is an area that had never been excavated. So far, we have found the walls, the pillars of a portico, and different constructive elements, such as the roof tiles, the first one that fell after the destruction of the building”.

The project, directed by Félix Arnold, from the German Archaeological Institute, and Alberto Montejo, a specialist from the Regional Government of Andalusia, will be completed by 2023, one year after the planned date, due to the size of the field.

Once finished, the specialists want the Plaza de Armas to become the “new visitor entrance to Medina Azahara (now, you can enter by crossing the fields or through the Palace)”. “This Plaza would be a good element for the distribution of visits and it would recover, in a certain way, its original mission: to coordinate the passage from the palace to the administrative area”, points out Canto. As soon as you enter, to your left, the Caliph’s police or civil servants would be watching you so that you don’t commit any outrage. It is, after all, a World Heritage Site.