In the 8th century, the Persian writer Ibn al-Muqaffa’ translated the Panchatantra (or the Fables of Bidpai) from Pahlavi into Arabic under the title Kalīla wa-Dimna (كليلة ودمنة). Since then, this book has been translated into many languages over time and has become a text that has permeated political and moral philosophies around the world.

From the Panchatantra to Kalīla wa-Dimna

The Panchatantra (Sanskrit name composed of two words: panch meaning ‘five’ and tanlra ‘book’)[1] is an ancient collection of animal tales and fables composed of five books traditionally attributed to a Brahmin (member of India’s first caste), Vishnusharma, from the Kashmir region. Historians believe that he wrote it in the 2nd century B.C. at the request of a Raja who wanted a guide to government for the future princes of the kingdom. However, to this day there is no consensus on its first author, origin, exact dating, and reason for creation.[2]

These fables were very popular and spread rapidly – both in writing and orally – to Asian countries along the routes of Buddhist pilgrims. In addition to East Asia, this work also spread to the Second Persian Empire from the 6th century when the Sassanid dynasty emperor Khosro I, after hearing the praises of this collection, asked Borzouyeh to translate the Pañchatantra from Sanskrit into Pahlavi.[3]  Unfortunately, this important version was lost.

We underline the historical importance of this manuscript because it was from it that the scholar Ibn al-Muqaffa’ translated the Panchatantra from Pahlavi into Arabic in the 8th century. He changed its title and added several chapters, finally giving birth to the famous work known today as Kalīla wa-Dimna. This Arabic version is especially important as it becomes the basis for all later translations, both Eastern and Western.

Each of the versions of this work reflects the political and social context in which they were compiled, so the preservation of the original manuscript is a fundamental issue in dealing with this collection of fables. The manuscript translated by Borzouyeh has not survived to the present day, which has led scholars of this book to ask the following question: should the Kalīla wa-Dimna of Ibn al-Muqaffa’ be considered as a translation (tarjama) or rather as an adaptation (ta’dîl), knowing that it contains different chapters?[4]

A pillar of Arab literature and political philosophy

Without entering into this debate, it is important to note how the Arabic version of al-Muqaffa’ succeeded in elevating this collection of fables to become a pillar of Arabic literature, putting it on a par with the One Thousand and One Nights.

Its great success is considered to be one of the starting points for the development of the magnificent Arabic literary prose that would later flourish and spread across centuries and continents.

Once spread throughout the Arab world, these tales continued their own process of evolution, giving rise to other translations, imitations or adaptations in different languages. The translation commissioned by King Alfonso X, is one of those that stand out. The latter, who was surrounded by Jewish, Christian, and Muslim scholars at his court in Toledo, had Kalīla wa-Dimna translated into Spanish around 1251 under the title Calila e Dimna.

Thus, numerous copies and versions of Kalila wa Dimna were produced and distributed over the centuries. The multiple translations and adaptations, both in Arabic and in other languages, makes it difficult today to distinguish between the imitations and the original text by Ibn al-Muqaffa’. Today, the Bibliothèque Nationale Française has the largest collection of manuscripts from this collection, some of which are exceptional because of their iconography.

A central iconography in the production and dissemination of these fables

The immense popularity of Kalīla wa-Dimna, as well as the literary genre of the fable, which lends itself perfectly to the use of images, have made the art of iconography and visual representation an intrinsic and important element in the dissemination of this collection. Like its translations, the iconography of these fables has always adopted the aesthetics of each cultural area and periods in which they were produced, thus emphasizing its intercultural character.

In fact, the question of how to illustrate the text probably arose before its translation into Arabic. It is noteworthy, for example, that one of the earliest prefaces in Arabic already emphasized the importance of iconography in the production of manuscripts.[5] Moreover, there are still archaeological remains carved in stone in India and on the island of Java depicting the fable of “The turtle and the two Ducks”, as well as wall paintings in Central Asia. All these traces and remains corroborate this hypothesis.[6]

Undoubtedly, when we talk about the illustration of this collection, the precious illuminated manuscripts produced by the Persian miniature school of Herāt (Afghanistan) in the 15th century stand out.

Contents of the Kalīla wa-Dimna stories

The title of the work comes from the names of two characters in these tales: two jackals named respectively Kalila and Dimna. These characters are both the heroes and the narrators of this collection of animal fables.

Kalila and Dimna live in the court of the lion Bankala, the king of the country. The former – Kalila – lives in such a way that he is grateful and content with his social status, while Dimna aspires to honor, whatever the means to achieve it. For this reason, he decides to present himself to the king and his court as an advisor in the first fable of the book, entitled “The Lion and the Ox”.

In these stories, both characters try to justify his social position through dialogues that link anecdotes involving both humans and other animals, in such a way that they give us precepts and morals about life in society, politics, and social relations in a playful and entertaining way for several reasons.

These general themes are always introduced at the beginning of the chapter by a moral or political question posed by the Indian king Dabshalim to the philosopher Bidpai.

The importance of context in understanding them

The next step in understanding Ibn al-Muqaffa’s Kalīla wa-Dimna is to know the context in which this version was written by this author.

These tales and stories can be read in different ways, and, although sometimes we have the impression that they do not deal with real situations due to their allegorical nature, they are in fact closely linked to their socio-political contexts and to universal and timeless aspects of human life.

But these are not the only fables based on the figure of animals that, through their stories, dialogues and anecdotes, propose morals and life lessons for human beings. For instance, we have The Conference of the Birds, by Farid Uddin Attar, an author born around 1119 in Nischapur, an allegorical work of deep mystical depth, and, much more recently, the famous fables of La Fontaine, which, according to many authors, were inspired by Kalīla wa-Dimna .

Ibn al-Muqaffa’s time was marked by significant socio-political changes, living at a time of the succession of two dynasties – Umayyad and Abbasid caliphate – which opposed two different conceptions of ruling. In this context, Al-Muqaffa’s adaptation of the original narrative was deeply influenced by his observation of the collapse of a “government” and the estbalishment of a new one.  For this reason, two of the main themes addressed in these fables are the means of retaining power and the question of obedience.[7]

Likewise, Al-Muqaffa’s position as kuttab (secretary) during both the Umayyad and Abbasid caliphates make of him an active figure in this process of change, and not only a passive spectator. His main mission was to serve the rulers in the education of the princes as well as in different political missions. This goal is reflected in the purpose of the book.

In fact, the Abbasid authorities turned this book into a veritable “manual” of political science, used for the basic training of young princes, some of whom had to learn it by heart along with the Qur’an.

The Persian scholar was thus influenced both by these political changes and by the important intellectual synergies of his time, which pushed him to reflect on the relationships between the different social classes and political power, and to study the nature of the pillars on which a society must stand in order to sustain itself over time.[8]

To fulfill its purpose, the collection uses a complex narrative structure that relies on the chaining of stories and the use of several levels of narration. This process was very popular in medieval literature and was also used in the One Thousand and One Nights.[9]

From the beginning of the work, Al-Muqaffa’ announces his will to use this double language, which is expressed in dichotomous terms, in a way that reflects a permanent opposition between the apparent meaning of the fable and its hidden meaning (the lesson of morality, of good conduct).

The apparent meaning is, of course, the result of the literary form of the fable, a fun and entertaining style that takes the reader on a journey into the animal world and the jungle space.

On the contrary, the hidden meaning conceals the political-philosophical content by which the animals and jackals become, through their dialogues and experiences, the advisors of the human being living in society, here represented by the jungle.

Understanding this level of narration – as the author specifies in the introduction – requires an effort of meditation on each fable and each word. This approach is supported by the parallelism between the search for hidden meaning and the search for treasures. If the reader of Kalīla wa-Dimna does not access the hidden meaning, he or she will be like the person who has a treasure at hand, but cannot access it because of lack of insight and foresight.

Through its hidden meaning, Kalīla wa-Dimna has an eminently political intent that deals with society and interpersonal relationships. As such, it contains many lessons that can continue to be useful in our time and offer important reflections on human relationships and politics. 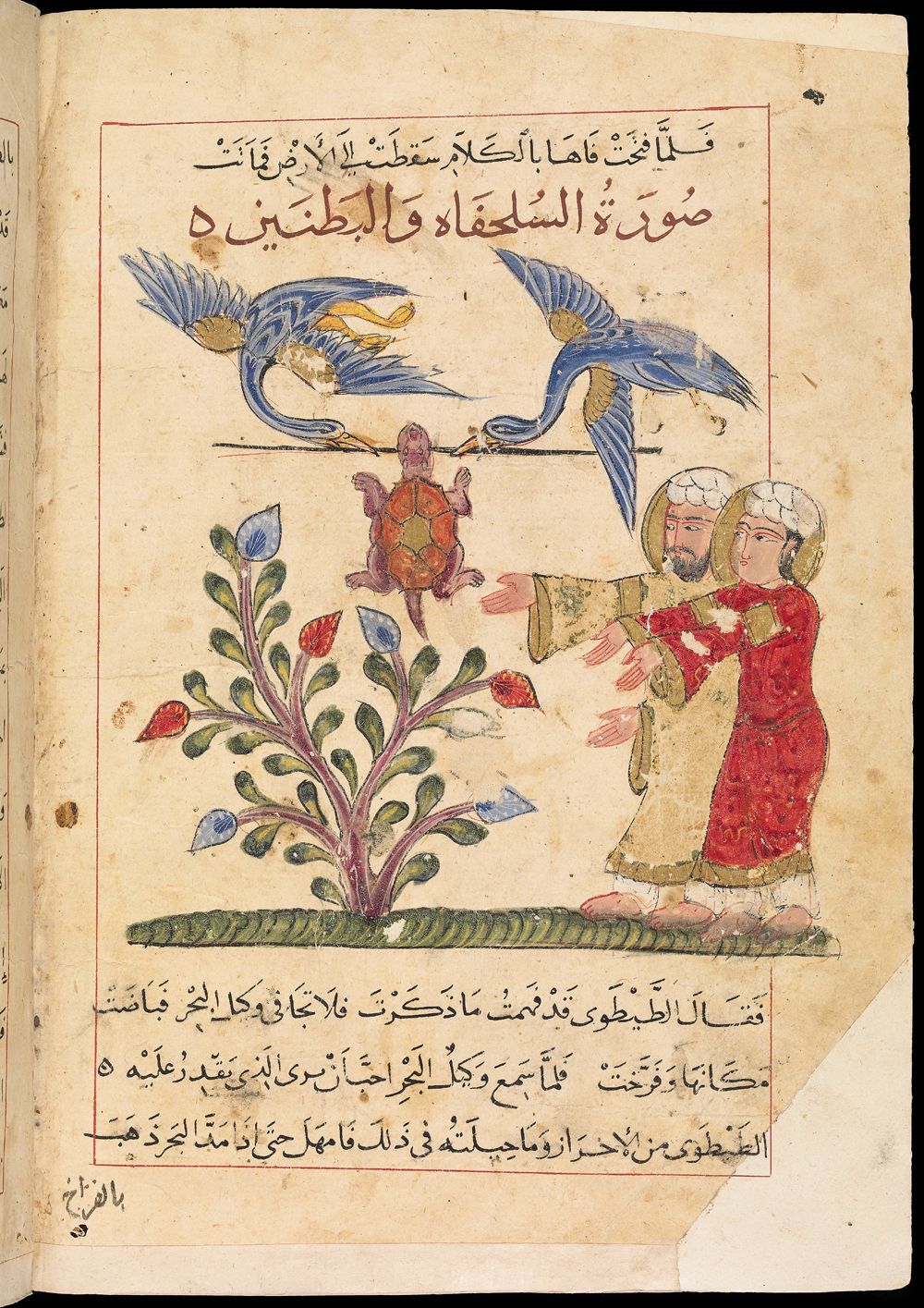 Both in the fables that form the body of the book and in the introductions added by different authors, the following questions are asked: “How to govern oneself and fight against one’s animal state?” and “how to govern others with ethics and justice?” Two questions that represent two essential dimensions of morality and political philosophy.

Kalīla wa-Dimna also illustrates the importance of the links between the figure of the intellectual and those of the ruler and power. As Makram Abbès says, the starting point of the book is, indeed, the relationship between the philosopher and the king.

The correlation between knowledge (philosopher/counselor) and power (the king) is brought out in different ways, and can be exercised either through direct criticism or through the art of advice. These texts seek to teach virtue and to confront some of the challenges that princes would encounter in the exercise of power, such as the self-contemplation of power or contentment.

Beyond the education of princes, these fables offer advice for everyone. For example, in the fable “The Lion and the Ox,” Dimna states:

It also introduces modern concepts, such as meritocracy:

“Dimna wanted the lion to honour him and give him an important position with himself and the people of his guard, but he wanted to show them that these rewards, far from being due to the fact that the lion knew his father, him Dimna, owed them to his qualities of judgment and his value […]”[11]

This collection thus contains many lessons that could still be useful in our time. These fables are inheritors of ancestral wisdoms that have been developed and spread across different periods of time and places and that remind us, mainly, of the principles of individual and political behaviour, or, in other words, the conduct of oneself and of the others. These questions are still valid today, and can serve as a pedagogical tool to improve coexistence and, therefore, to avoid the abuse of power in our societies.