Travel is a culturally enriching activity, and a liberating experience. In a flush of enthusiasm for an alien and exotic world, many male and female travelers have undertaken the project of writing about Damascus.

Despite the fact that Damascus exists to a large extent in Travel literature and in the stories told by its writers, there are many untold stories that reside beneath the many layers of this old city. Since Damascus maintained its privacy for centuries, most of the stories narrated about Damascus seem to repeat what travelers said about its charm. It is usually portrayed through the loving eyes of the beholders who admired its outer beauty. Nevertheless, many stories are left untold or probably told in a semi-detached manner that does not dissolve into the agony of the city. Hence, Damascus remains, largely, a riddle to its citizens and to modern travelers who seem to oscillate back and forth in a love-hate relationship. 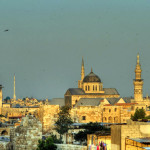 In the early Christian tradition and the Muslim one, Damascus exists in the imagination of many as the original Garden of Eden. The city had been spoken about as a mythical city deeply rooted in a heroic past. It had been refereed to as “the Paradise, which the righteous have been promised. There shall flow in it rivers of unpolluted water.” It is also mentioned in Shakespeare’s Henry IV as the place that cursed the sight of Cain killing his brother Abel to an extent that Qasyoun Mountain opened its mouth in awe.

Most of the old stories written about Damascus assert its glory and natural beauty. After visiting Damascus in 1869, Mark Twain describes it in The Innocents Abroad as “a type of immortality”. “To Damascus, years are only moments…. She measures time not by days, months and years, but by the empires she has seen rise and prosper and crumble to ruin.” According to Twain, Damascus can never die, “so long as its waters remain to it.” In April 1833, the French poet Alphonse de Lamertine came along the hill road towards Damascus where he saw “the town, surrounded by walls… watered by the seven branches of its rivers, and streams without number…” Similarly, Al-Maqdisi, an Arab geographer remarked in AD 985: “Damascus is a city intersected by streams and begirt with trees.”

Some travelers concentrated on the cultural side of the city. In 1154, the geographer Ibn Mohammed al-Idrisi wrote: “The city of Damascus contains all manner of good things, the streets of various craftsmen, with merchants selling all sort of silk and brocade of exquisite rarity and wonderful workmanship.” According to Ibn Batouta, the famous Arab traveler from North Africa in 1326, “there were seventy muezzins to chant the call for prayers, which was at that time a harmony of several voices together”. In portraying the daily lives of people and their local habits, the French Consul in Aleppo in 1660, Chevalier d’ Arvieux, wrote: “the people here are richer, and less exposed to the tyrannies of their rulers. From whatever nation or religion, they like to be well-dressed, well-housed and well-supplied.” 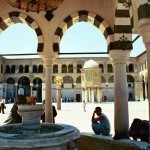 However, most female travelers tried to delve deeper into people’s customs, manners and morals, with a special emphasis on the domestic experiences of women. Hence, in the passages devoted to the baths in her book The Inner Life of Syria, Isabel Burton assumes the role of the ‘facetious cicerone’ and compares Damascene hammas to those near Regents Park. She concentrates on the behavior of women in an all-female space, such as women’s bath. To an anonymous traveler in 1860, the ambiguities that engulf the city are typically related to the obscurities that revolve around the veiled female body in discourses on the Orient. “Damascus is like the women… that cover their embroidered dresses with cheap cotton veils; she keeps the treasures hidden and only shows the European visitor who wanders her streets a dull view of windowless walls…” In an attempt to invade a predominately male space, Lady Hester Lucy Stanhop visited Damascene mosques dressed up as a young Mameluke.

According to Brigid Keenan in Damascus: Hidden Treasures of the Old City, Damascus is the largest unexcavated archaeological site in the world, because it is the oldest continuously inhabited city on earth. “No one has ever been able to explore what lies underneath the town because there have always been people living in it. Its mysteries are buried under two-and-a half meters (eight feet) of earth and debris, to which each ruler, each civilization, has contributed a layer.”

Consequently, old Damascene houses were especially fascinating to Western travelers. According to George William Curtis, an American who visited Damascus in 1852 wrote: “Each Damascus house is a Paradise.” Eugene-Melchior de Voyage, a French traveler in 1872, described the interiors of the houses of Damascus, as “defying the wildest flights of imagination all is freshness, silence and delight for the eyes.” Of course, some of these houses are left to face decay, while others are invested as restaurants.

In The Road from Damascus, A Journey through Syria, Scott C. Davis transcended the beaten path into side streets and mountain villages. On his first night in Syria, traveling on a transit bus into Damascus, Davis was overcome by fear. Weeks later after his return to Damascus from the Eastern steppe, Davis welcomed the city as a “safe moorage, a quiet resting place, and enduring home”. At the end of his visit, a patriarch reminded Davis, that according to the Bible, St. Paul experienced his conversion via a vision of God on the road to Damascus. After his second visit, Davis realized that the key issue is how to walk the road from Damascus.

In Dreaming of Damascus, Stephen Glain distills his experience into an intimate account of how the Arab world may collapse in the absence of badly needed reform. In an attempt to illustrate how a once prosperous and enlightened civilization finds itself at a crossroad between Dark Age and New Dawn, Glain takes us on a journey through the heart of what was the great Islamic caliphate. Since the Umayyad Dynasty was the largest empire the world had yet known, the world’s most accomplished scientists, physicians, artists and musicians used to come to Damascus. 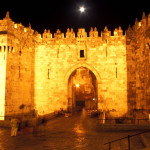 In Mirror to Damascus 1986, Damascus is perceived as a city that preserves its essence more than any other great Middle Eastern city. Colin Thubron explores the historical, artistic, social and religious inheritance of the Damascenes in an amusing manner. According to him, despite the changes that took place in the Old Town, “the ancient flavor persists here. A café society still hums and confabulates along the Barada River. The traditional country and houses remain, and the suqs still flare with color.”

In fact, many Syrian writers were keen on expressing their deep love and admiration of Damascus in their poems and novels. For example, Nizar Qabbani expressed his nostalgia for the old houses of Damascus in his poem “Letter to My Mother” in which he said:

Find a home in our hearts.

Its minarets shed light on our travels.”

Similarly, in Daughters of Damascus, Siham Tergeman expressed her love of the city in a form of a love letter addressed to the houses,

The irony is that most of the writers who adored Damascus spent a large extent of their lives abroad, but they eventually came back to be buried in their beloved city which henceforth becomes both the cradle and the grave.

Despite all these tales narrated about Damascus, almost nothing is known of the first Damascenes. Since Damascus is more or less an enigma, there is a dire need to recover the oral tradition and the unwritten history of Damascus, in order to be able to know what lies behind closed doors, iron bars and stone walls, and underneath the layers of subsequent civilizations. In celebrating Damascus as the Capital of the Arab culture in 2008, and in an attempt to divulge some of the old secrets of the city, several Syrian intellectuals in the Memory Club gathered in a downtown café to narrate some of their memories of Damascus in a sarcastic manner. Nevertheless, many stories continue to be transmitted from one generation to another in private, without ever being exposed to the public. Nowadays, some aspiring writers open up their diaries, break the silence and resort to the cyberspace to publish their private versions of that untold story_ Damascus.