Designed by FUNCI and carried out inside the Jardin d’Essais Botaniques in Rabat, declared World Heritage city by UNESCO in 2012collaboration with the Wilaya of Rabat-Salé-Zemmour-Zaer, the Hassan II Fund for Social and Economic Development and the Moroccan Institute of Agricultural Research (INRA).

The Jardin d’Essais was developed in the early 20th century by the landscape artist Jean Claude Nicolas Forestier and has recently been rehabilitated, as a part of the historic context recognized by UNESCO.

The new pedagogical garden is an Andalusi-inspired garden. It is a synthesis, with some Almohad influences, of the stylistic, philosophical and scientific meaning of a garden of the time of Al-Andalus. This closed type of patio-garden is in line with the hortus conclusus.

The idea is to generate a setting for study and spreading of culture, a showcase garden of andalusi space concepts, water and plant use. The site would also have a vegetable garden where the common al-Andalus species would be grown, including vegetables, fruits and other plants to which economic and decorative uses were given. Thus, the practical and sensorial and spiritual duality present in andalusi cultivated areas and gardens have been recreated, as told by agricultural and poetic texts of the time.

The Water in Al-Andalus 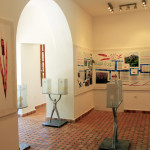 Inside the pavilion, we have curated and exhibition entitled ‘Al-Andalus, a Culture of Water’, created by FUNCI in which the great importance of water in the islamic civilization is remarked, and concretely in Al-Andalus from different points of view. The objective of this project is the scientific research, in architecture and botanic topics, cultural dissemination and environmental raising awareness.

Both garden and pavilion were designed and restored respectively by two of our collaborators, the architect Antonio Almagro (Arabic Studies School) and the agronomist Esteban Hernandez (Cordoba University). Faisal Cherradi and Néstor Martínez are responsible for the technical direction which has been within the Med-O-Med framework.

The garden was inaugurated by his Majesty the King of Morocco, alongside other distinguished personalities from the country’s capital. Our Andalusi Garden and the Neo-Moorish Pavilion hosting the exhibition “Al-Andalus, a culture of water” were certainly a remarkable part of the official ceremony.