There were Seven Wonders of the Ancient World. Now, 2,200 years later, we are choosing the new Seven Wonders! You can help to choose seven new symbols of the world, vote now!

The Alhambra of Granada, in Spain, is one of the proposals

The Alhambra was so called because of its reddish walls (in Arabic, («qa’lat al-Hamra’» means Red Castle). It is located on top of the hill al-Sabika, on the left bank of the river Darro, to the west of the city of Granada and in front of the neighbourhoods of the Albaicin and of the Alcazaba. 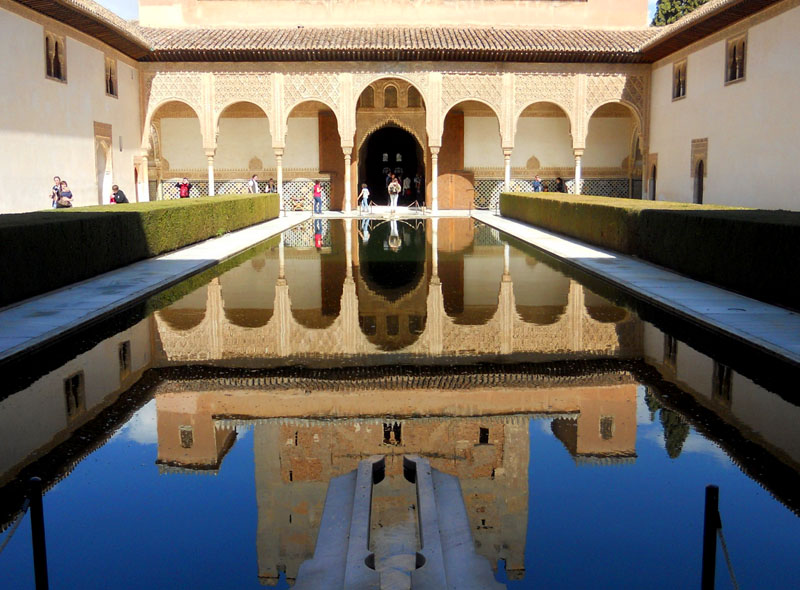 The Alhambra is located on a strategic point, with a view over the whole city and the meadow (la Vega), and this fact leads to believe that other buildings were already on that site before the Muslims arrived. The complex is surrounded by ramparts and has an irregular shape. It limits with the valley of the river Darro on its northern side, with the valley of al-Sabika on its southern side and with the street Cuesta del Rey Chico on the eastern side. The Cuesta del Rey Chico is also the border between the neighbourhood of the Albaicin and the gardens of the Generalife, located on top of the Hill of the Sun (Cerro del Sol).

The first historical documents known about the Alhambra date from the 9th century. They refer to Sawwar ben Hamdun who, in the year 889, had to seek refuge in the Alcazaba, a fortress, and had to repair it due to the civil fights that were destroying the Caliphate of Cordoba, to which Granada then belonged. This site subsequently started to be extended and populated, although not yet as much as it would be later on, because the Ziri kings established their residence on the hill of the Albaicin.

The castle of the Alhambra was added to the city’s area within the ramparts in the 9th century, which implied that the castle became a military fortress with a view over the whole city. In spite of this, it was not until the arrival of the first king of the Nasrid dynasty, Mohammed ben Al-Hamar (Mohammed I, 1238-1273), in the 13th century, that the royal residence was established in the Alhambra. This event marked the beginning of the Alhambra’s most glorious period. 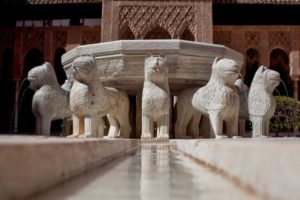 First of all, the old part of the Alcazaba was reinforced and the Watch Tower (Torre de la Vela) and the Keep (Torre del Homenaje) were built. Water was canalised from the river Darro, warehouses and deposits were built and the palace and the ramparts were started. These two elements were carried on by Mohammed II (1273-1302) and Mohammed III (1302-1309), who apparently also built public baths and the Mosque (Mezquita), on the site of which the current Church of Saint Mary was later built.

Yusuf I (1333-1353) and Mohammed V (1353-1391) are responsible for most of the constructions of the Alhambra that we can still admire today. From the improvements of the Alcazaba and the palaces, to the Patio of the Lions (Patio de los Leones) and its annexed rooms, including the extension of the area within the ramparts, the Justice Gate (Puerta de la Justicia), the extension and decoration of the towers, the building of the Baths (Baños), the Comares Room (Cuarto de Comares) and the Hall of the Boat (Sala de la Barca). Hardly anything remains from what the later Nasrid Kings did.

From the time of the Catholic Monarchs until today we must underline that Charles V ordered the demolition of a part of the complex in order to build the palace which bears his name. We must also remember the construction of the Emperor’s Chambers (habitaciones del Emperador) and the Queen’s Dressing Room (Peinador de la Reina) and that from the 18th century the Alhambra was abandoned. During the French domination part of the fortress was blown up and it was not until the 19th century that the process of repairing, restoring and preserving the complex started and is still maintained nowadays. 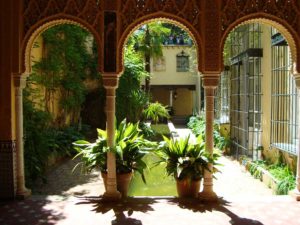 The Nasrid architecture marked the end of the glorious period that started with the Umayyads in Cordoba in the 8th century. The architects of the Cordovan mosque, which was built a long time before the Alhambra, did not influence this architecture. It includes some of the typical elements of the andalusian architecture, such as the horseshoe arch with sprandel (square wide frame which envelopes the arch) and the arch scallops (arch scallop of triangular shape), as well as its own special elements such as the capitals of the columns of the Alhambra.

The greatest concern of the architects of the Alhambra was to cover every single space with decoration, no matter the size of the space. No decorative element was enough. Most of the interior arches are false arches, with no structure; they are there only to decorate. Walls are covered with beautiful and extremely rich ceramics and plasterwork. And the coverings have wooden frames that have been exquisitely carved, etc.

Even though the Muslim art bans the representation of figures, the decorating themes in the Alhambra are quite varied. The classical calligraphic decoration is used, in particular cursive and kufic inscriptions, which reproduce the words of Zawi ben Ziri (founder of the Nasrid dynasty): “Only God is Victor”, and poems written by different poets of the court.

The greatest concern of the architects of the Alhambra was to cover every single space with decoration, no matter the size of the space. No decorative element was enough.

The decorative elements most often used by these architects were stylised vegetal forms, interlacing decoration and the nets of rhombuses.

The Alhambra was built with its own special type of column, which is not used in any other building. This column has a very fine cylindrical shaft, the base of which has a big concave moulding and is decorated with rings on the top part. The capital is divided into two bodies and the first one, cylindrically shaped, has a very simple decoration and a prism with a rounded-angled base and stylised vegetal forms as decoration.