The Amazigh (Berber) are credited with preserving the Phoenician language till the time of Saint Augustine in the 5th century & traces of the Phoenician alphabet are evident in the Tamazight (Berber) alphabet called Tifinagh.

The Phoenician colonies in North Africa started out as peaceful, trading presence among the Amazigh original inhabitants of the region. These colonies, though initially inhabited by Phoenicians from the eastern Mediterranean, became a mix of the two peoples as they intermarried with the local Amazigh. The Amazigh, as well as the Punic Phoenicians, who survived the Roman subjugation of the region are credited with preserving the Phoenician language up till the time of Saint Augustine in the 5th century. Further, traces of the Phoenician alphabet are evident in the Tamazight (Berber) alphabet called Tifinagh. The presence of the Berber in North Africa today is a living proof that the “Arab World” is not made up of 325 million Arabs. In fact, pan-Arabism is an unfounded heresy forced down the throats of people conquered and subjugated beginning with the advent of the Arab conquest in the 7th century. The Amazigh, much like the overwhelming majority of the people of this (Arab) “world,” belong to a wide variety of ethnic groups that are different in blood, tradition, language, literature, art and history, and should not be lumped together as a single people.

Who and what are the Amazigh (Berber)? 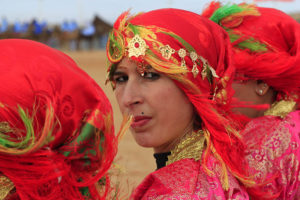 The Amazigh which means “free humans” or “free men” are known to the world as Berbers. In fact, the word Berbers is offensive to these ancient inhabitants of north Africa and the Sahara desert. The name “Berber” is another one of many peccadilloes of the Romans who threw names at people left and right. They, along with the Greeks referred to every people they could not understand with the same unintelligible Berber language whether they were in the East or the West. The majority of the Moors in medieval “Arabic” Spain were actually Berbers, who had adopted the Arabic Moslem culture and Arabic as their written language. Even today the Berbers are ethnically — but far from politically — the dominant part of the populations of Morocco, Algeria, Tunisia and Mauritania. Isolated Berber-speaking groups are found all over North Africa, from the Atlantic in the west to Egypt in the east. A colorful nomadic Berber tribe, the Tuaregs, whose male warriors wear blue dresses and indigo-colored veils, still roam the Sahara desert

It may come as a surprise to hear that the North African Moslem countries Morocco and Algeria are, in an ethnic sense, not Arab nations at all, but Berber nations, speaking a completely different language than Arabic. Politically the Arab minority has dominated these countries for centuries, and has — without much success, though — attempted to eradicate the Berber language. This also holds true of the present leaderships in independent Morocco and Algeria, who up to now have tried to establish an Arab identity for their countries. In recent years the North Africa/Tamazgha — Morocco, Algeria, Tunisia and Libya — (“land of the setting sun” in Arabic, i.e. the western part of North Africa) has experienced an awakening of Berber consciousness. Berber protests have had limited success, but they have at least led to the introduction of formal teaching of Berber in some Moroccan and Algerian schools and universities. The strong Berber desire to establish a national Berber identity appears to be accelerating. In 2001 and 2002 several Berber demonstrations have been held in Morocco and Algeria, calling for official acceptance of Berber identity and state-funded education in the Berber language. 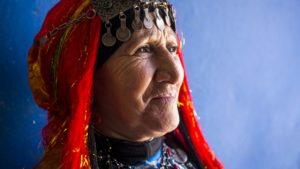 In terms of “blood”, Berbers probably represent as many as 80% of the population in Morocco and Algeria, more than 60% in Tunisia and Libya and 2% in Egypt, altogether some 50 million people. A proper Berber census has never been taken and the above figures are uncertain. Centuries of cultural “Arabization” has persuaded many Berbers, particularly in the cities, to adopt the Arabic language. The number of people perceiving themselves as Berbers is hence much lower, about half of the figure given above. However, the influx of “proper” Arabs from the East into the Berber area, in connection with the Muslim conquest in the 8th century, is estimated at only 200 000. It is thus quite probable that the population of the North Africa/Tamazgha — Morocco, Algeria, Tunisia and Libya — actually consists of native Berber stock. Some 4 million North Africa/Tamazgha — Morocco, Algeria, Tunisia and Libya –ians, half of whom perceive themselves as Berbers, now live in Europe, mainly in France. The Berber language is known as “Berber” to Europeans and as “Shilha” to Arabs, while the Berbers themselves call their language Tamazight (the “gh” in the words Tamazight and Amazigh is pronounced as a sharp “r”). The language has a large number of dialects, due to the wide geographical separation of different Berber-speaking groups.

The Berbers have never experienced a unified political identity, which makes a review of the “history of the Berbers” somewhat problematic. There have been many strong Berber-led and Berber-populated kingdoms and cultures – often warring among themselves – existing in parallel in various regions of North Africa and Spain, but never a unified “Berber empire”. Nor have these cultures used any written Berber language – there are almost no written records in Berber, except for short inscriptions on a few monuments and buildings. Instead, the Berbers have tended to assimilate the culture and adopt the written language of their conquerors – initially Phoenician, Greek and Latin, later Arabic – while continuing to speak spoken Berber among themselves.