The British Library announce that HRH The Duke of Edinburgh and His Majesty Mohammed VI, King of Morocco, are the royal patrons of its forthcoming exhibition, Sacred: Discover what we share, which presents some of the world’s earliest-surviving, most important and beautiful religious texts from the Jewish, Christian and Muslim faiths.

This groundbreaking exhibition is funded by donors representative of all three faiths, including the Coexist Foundation, The Moroccan British Society and Saint Catherine Foundation.

Rare and exquisite examples from the Library’s collections – considered to be one of the greatest in the world – will be presented alongside treasures on loan from other institutions. These include three Qur’ans from Morocco’s Royal Library in Marrakech, as well as other loans from its national collections.

Many of the lavishly illustrated or decorated books and manuscripts have never, or seldom, been on public display while others will be on show for the first time in the UK. Sacred also marks the first time that texts from these three faiths will have been displayed and explored together, side-by-side, in a major UK exhibition. 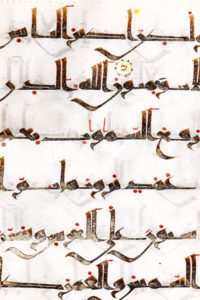 The exhibition offers a once-in-a-lifetime opportunity for the general public to see so many of the Library’s sacred texts showcased at the same time, with around 230 manuscripts, texts and other objects displayed in a unique and compelling modern context.

The British Library’s Chief Executive, Lynne Brindley, said: “We present this exhibition as a contribution to the greater understanding of these three faiths, their historical roots, and their significance in the world today. As one of the world’s great libraries, we invite everyone – of faith or no faith – to come, to think, to debate and to learn. It is also an opportunity to marvel at the beauty of the texts and to gain greater understanding of their contemporary relevance.”

Sacred sees priceless examples of the Torah, New Testament and Qur’an mounted alongside each other – not individually in separate zones. The texts will be treated thematically, exploring points in common, looking at the ways in which they have been produced, interpreted and used. By integrating material in this way, the exhibition will demonstrate how these faiths have interacted and influenced one another, and will enable visitors to learn about all three alongside each other.

The exhibition explores inter faith attitudes in the UK both today and in the past and takes a look at community and schools projects from around Britain.

The exhibition is part of the Library’s long-term plans to feature other major world faiths which are represented within its collections.

Among the treasures to be displayed are:

Codex London: One of the oldest surviving manuscripts of the Torah, the first five books of the Old Testament, which are central to Jewish worship. The traditional Jewish view is that these five books were written by the Prophet Moses at divine dictation. This rare early copy was made in the Middle East, perhaps Palestine, in the 10th century.

Codex Sinaiticus: It is the oldest complete manuscript of the New Testament and the earliest and best witness for some books of the Old Testament as well. This copy of the New Testament in Greek is absolutely key in the history of Christian textual scholarship. It was produced around 350 AD, possibly in Palestine, but its name derives from the still active Monastery of Saint Catherine near the foot of Mount Sinai in Egypt where it was preserved for many centuries.

Ma’il Qur’an: One of the earliest Qur’ans in the world to have survived, this dates from the beginning of the 8th century AD. That equates to the 1st century in the Muslim Hijri calendar, which means that this manuscript was penned within 100 years of a key event in the founding of Islam i.e. the hejira or flight of the Prophet Muhammad from Mecca to Medina in 622 AD to escape his enemies. It was produced on the Arabian peninsula, probably in or near the holy cities of Islam.

Syriac Pentateuch: The earliest known dated Biblical manuscript. This copy of the Books of Genesis, Exodus, Leviticus, Numbers and Deuteronomy in Syriac is the earliest known dated Biblical manuscript. It was written by Deacon John at Amida (modern Diyarbakir in south eastern Turkey) in 463. Syriac was the language of the Syrian Church which extended across modern Turkey, Syria and Iraq. This version of the Bible (known as the Peshitta or ‘simple’ version) became important as the origin of most of the translations made into other languages of the Eastern churches, including Armenian.

Old English Hexateuch: As the earliest copy in English of part of the Old Testament, produced in the first half of the 11th century, this manuscript from Canterbury is both remarkable and unique, featuring over 400 illustrations. Its Old English versions of Genesis, Exodus, Leviticus, Numbers, Deuteronomy, and Joshua are partly the work of the Benedictine monk Aelfric (d. 1020). His scholarly paraphrases aimed to offer non-clerical readers insight into the sacred text of the Vulgate. The dominance of the vivid illustrations may indicate that this copy was commissioned for such a lay person.

The Lisbon Hebrew Bible: One of the last great examples of Jewish art from Iberia, this exquisitely illuminated Bible was completed in three volumes in 1482, just 15 years before the Jews were expelled from Portugal. Lisbon was the last centre of Jewish manuscript art to flourish on the Iberian Peninsula. The Lisbon Bible contains many intricate floral and arabesque designs as well as superb ornamental Hebrew lettering and micrographic embellishments.

Duke of Sussex‘s Spanish Bible: One of the finest illustrated Hebrew Bibles, dating from the middle of the 14th century, produced in Catalonia, Spain, under Christian rule. It must have been prepared for a very wealthy patron, given the sheer ‘weight’ of burnished gold expended in its production. The illustrations in this manuscript powerfully express the theme of messianic hope, the longing to rebuild the Temple in Jerusalem.

“Golden” Haggadah: One of the most lavish and luxurious of all manuscripts ever created of the Passover Ritual, requiring a very wealthy patron. All the miniature paintings have backgrounds of tooled gold leaf, hence the manuscript’s name. It contains the story of the Exodus of the Jews from Egypt under Moses’ leadership and their liberation from slavery under the Pharaoh. This heavily gilded copy was produced circa 1320, in Catalonia, most likely in Barcelona, when the area was under Christian rule.

Commentary on Diatessaron: Part of a 6th Century commentary containing quotations from the ‘Gospel Harmony’ which was ruthlessly suppressed by the early Church. Less than 100 years after their composition, the Four Gospels familiar to us today had been distilled into one. No complete copy of the original text has survived – it is known only in later translations and from commentaries such as this.

Carpet page from a Qur’an: 14th Century, Morocco. The design of this magnificent carpet page and the style of its illumination are typical of decorative frontispieces produced in North Africa and Andalusian Spain. Gold, red, blue and green are the colours most often used in the decoration of manuscripts from this region. The most prominent feature of this carpet page is the geometric frame formed by the interlocking squares and octagons highlighted in white ink and filled in with arabesques.

The curtain covering the door into the Ka’bah Stone at Mecca. The most distinctive feature of the Grand Mosque at Mecca, the holiest site of Islam, is the black stone structure in the centre. This is known as the Ka’bah, and is the focal point for worship during daily prayers. A new covering called a ‘kiswah’ is made for the Ka’bah every year during the month of pilgrimage, and the old covering is cut up and the pieces kept as relics. The curtain covering the door into the Ka’bah is considered one of the most precious of these relics. This beautiful example ornamented with Qur’anic inscriptions was made for the Ottoman Sultan Abdulmajid I in 1858.

Silos Apocalypse: A vividly illustrated copy of the Book of Revelations named after the place in Spain (Silos) where it was made in the late 11th / early 12th century. The dramatic illustration of the great dragon let loose upon the world with seven heads and ten horns being fought by St Michael and other angels has been taken to be a contemporary reference to the spread of Islam which would have had special resonance in Spain.

Uljaytu Qur’an: This royal deluxe manuscript of the Qur’an, made for the early 14th Century Mongol ruler of Iran, Uljaytu, a direct descendant of Ghenghis Khan, was copied in 30 separate parts. This is part 25, one of very few complete ‘one-thirtieths’ of this particular manuscript to have survived.

Sultan Baybars’ Qur’an: One of the finest of all Qur’an manuscripts, written in large letters of gold in seven magnificent folio volumes. It is little wonder that it took three years (1304-06) to produce. Apart from the wonderfully bold calligraphy, each volume is provided with a magnificent double frontispiece, showing the intricacy of Islamic geometric patterns at its finest.

Book of Psalms in Arabic: A beautifully illuminated manuscript of the Book of Psalms prepared for the Coptic Christian community in Egypt and dating from the early 16th century.  At first glance the traditional “carpet-page” with purely Islamic geometric designs leads one to imagine it to be another Mamluk-period Qur’an.  But turn the page and the portrait of King David comes as a surprise.  This is a Christian manuscript but heavily influenced in its decoration, script, and layout by the manuscripts of the dominant religion of the area, Islam.

Sacred is open from 27 April 2007 to 23 September 2007, every day. Admission to the exhibition is free and timed tickets are in operation. Advance booking is recommended. Bookings can be made online at http://boxoffice.bl.uk, by calling 01937 546546 or in person at the British Library. Further information is available on the Library’s website at www.bl.uk