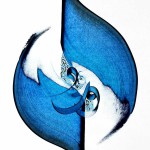 Hassan Massoudy is an artist for whom the word itself remains the most sublime creative force. His creations are a subtle mix of present and past, oriental and occidental, tradition and modernity.  The words and phrases, which are the inspiration for his calligraphy, are drawn from proverbs, poets and philosophers throughout the centuries, ranging from St. Augustine, Virgil and Ibn’ Arabi to Baudelaire and Rousseau.

Hassan Massoudy was born in 1944 in Najef, southern Iraq, growing up in a traditional Iraqi society.  He moved to Baghdad in 1961 learning the various classic styles of calligraphy  studying graphic design, communication arts and fine arts.  His desire to study art, coupled with the political events in Iraq at the time, saw him leave for Paris in 1969 where he enrolled at the École des Beaux- Arts. 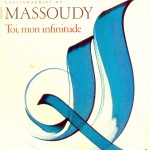 Massoudy was not only influenced by the great Arabic masters but also the painters Leger, Matisse, Soulages and Picasso. After receiving his degree in 1975 he returned to calligraphy in a more enriched way, employing  classical styles in a newer and freer manner. For thirteen years from 1972 he toured Europe with his Arabesque performance  combining music, poetry and calligraphy.

Peace and tolerance are central themes of his work leading him to work with Amnesty International, UNICEF and other related organisations.

Massoudy’s work was exhibited and used as the primary promotional image for the British Museum’s 2006 exhibition, Word Into Art: Artists of the Modern Middle East. This is a sample of his first solo exhibition at the October Gallery, in London.