Abu Zayd ‘Abd al-Rahman ibn Muhammad ibn Khaldun al-Hadhrami, 14th-century Arab historiographer and historian, was a brilliant scholar and thinker now viewed as a founder of modern historiography, sociology and economics. Living in one of humankind’s most turbulent centuries, he observed at first hand—or even participated in—such decisive events as the birth of new states, the death throes of al-Andalus and the advance of the Christian reconquest, the Hundred Years’ War, the expansion of the Ottoman Empire, the decline of Byzantium and the great epidemic of the Black Death. Albert Hourani described Ibn Khaldun’s world as “full of reminders of the fragility of human effort”; out of his experiences, Arnold Toynbee wrote,

“He conceived and created a philosophy of history that was undoubtedly the greatest work ever created by a man of intelligence….”

So groundbreaking were his ideas, and so far ahead of his time, that a major exhibition now takes his writings as a lens through which to view not only his own time but the relations between Europe and the Arab world in our own time as well. —The Editors 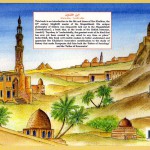 Ibn Khaldun’s ancestors were from the Hadhramawt, now southeastern Yemen, and he relates that, in the eighth century, one Khaldun ibn ‘Uthman was with the Yemeni divisions that helped the Muslims colonize the Iberian Peninsula. Khaldun ibn ‘Uthman settled first at Carmona and then in Seville, where several of the family had distinguished careers as scholars and officials.

During the Christian reconquest of the Iberian Peninsula, the family emigrated to North Africa, probably about 1248, eventually settling in Tunis. There Ibn Khaldun was born on May 7, 1332. He received an excellent classical education, but when he was 17, the plague, or Black Death, reached the city. His parents and several of his teachers died. The terrible epidemic that struck the Middle East, North Africa and Europe in 1347–1348, killing at least one-third of the population, had a traumatic effect on the survivors. Its impact showed in every aspect of life: art, literature, social structures and intellectual life. It was clearly one of the experi- ences that shaped Ibn Khaldun’s perception of the world.

Tunis was not only ravaged by the Black Death, but had also been reduced to political chaos by its occupation between 1340 and 1350 by the Marinids, the Berber dynasty that ruled Morocco. At 20, Ibn Khaldun set out for Fez, the Marinid capital, the liveliest court in North Africa. On the strength of his education, he was offered a secretarial position, but left before long. Although some historians regard his departure as disloyal, it is more likely he was fleeing the general political disintegration.

This was to be a pattern in Ibn Khaldun’s life. He was constantly tempted to become involved in murky political intrigues which, combined with the extreme instability of most of the ruling dynasties, meant that he had little choice but frequent changes of master. These experiences, like those of the Black Death, were instrumental in shaping his outlook.

After a number of moves, he found himself back in Fez, where the previous Marinid ruler had been supplanted by his son, Abu ‘Inan, to whom Ibn Khaldun offered his services. Soon, however, he was once again caught up in political turmoil, and after many changes of fortune, including two years in prison, he decided to withdraw to Granada in 1362. The roots of this decision went back several years.

A famous scholars of the age 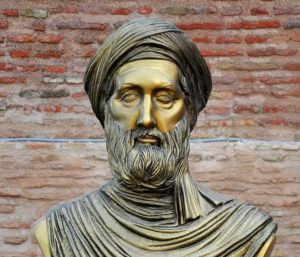 In 1359, the ruler of Granada, Muhammad ibn al-Ahmar, had been forced to flee to Fez together with his vizier, Ibn al-Khatib, one of the most famous scholars of the age. There they had met Ibn Khaldun. A warm friendship had developed, so that when, in turn, Ibn Khaldun had to escape from similarly dangerous politics, he was received in Granada with honors. Two years later, in 1364, Ibn Khaldun was sent by Ibn al-Ahmar to Seville on a peace mission to King Pedro I of Castile, known as “Pedro the Cruel.” In his Autobiography (Ta‘rif), Ibn Khaldun describes how Pedro offered to return his family estates and properties to him, and how he refused the offer. This contact with a Christian power was another watershed experience. He reflected not only on his own family’s past, but also on the changing fate of kingdoms—and above all on the historical and theological implications of the reassertion of Christian power in Iberia after more than five centuries of Muslim hegemony.

Later, personal clashes with Ibn al-Khatib, probably fueled by a mixture of jealousy and court intrigue, drove Ibn Khaldun back to the turmoils of North Africa. He had repeatedly expressed the wish to devote his life to scholarship, but the political world clearly fascinated him. Over and over he succumbed to its temptations; in any case, so well-known a figure was unlikely to be left in peace to study.

In spite of their differences, Ibn Khaldun continued to correspond with Ibn al-Khatib, and several of these letters are cited in his Autobiography. He also tried to save his friend when, largely as a result of court intrigue, Ibn al-Khatib was brought to trial, accused of heresy for contradicting the ‘ulama, the religious authorities, by insisting that the plague was a communicable disease. His situation can be compared with that of Galileo nearly three centuries later, but with a less happy outcome: Ibn al-Khatib was strangled in prison at Fez in the late spring of 1375.

Ibn Khaldun was much affected by his friend’s death, not only personally, but also because of the political and religious implications of such an execution. Not long afterward, he withdrew to the Castle of Ibn Salamah, not far from Oran in Algeria. There, for the first time, he could really dedicate himself to study and reflect on what he had learned from books, as well as on his often bitter experience of the violent and turbulent world of his day.

The fruit of this period of calm was the Muqaddimah or Introduction to his Kitab al-‘Ibar (The Book of Admonitions or Book of Precepts, also often referred to as the Universal History.) Although these are really one work, they are often considered separately, for the Muqaddimah contains Ibn Khaldun’s most original and controversial perceptions, while the Kitab al-‘Ibar is a conventional narrative history. Ibn Khaldun continued to rewrite and revise his great work in the light of new information or experience for the rest of his life.

He spent the years from 1375 to 1379 at the Castle of Ibn Salamah, but at last felt the need for intellectual companionship—and for proper libraries in which to continue his research. At the age of 47, Ibn Khaldun returned again to Tunis, where “my ancestors lived and where there still exist their houses, their remains and their tombs.” He planned to travel no more and to settle down as a teacher and scholar, eschewing all political involvement.

That was not so easy. Some considered his rationalist teachings subversive, and the imam of al-Zaytunah Mosque in Tunis, with whom he had been on terms of rivalry since his student days, became jealous. To make matters yet more difficult, the sultan insisted that Ibn Khaldun remain in Tunis and complete his book there, since a ruler’s status was greatly enhanced by attracting learned men to his court.

The situation finally became so tense and so difficult that in 1382 Ibn Khaldun asked permission to leave to perform the hajj, the pilgrimage to Makkah—the one reason for withdrawal that could never be denied in the Islamic world. In October he set out for Egypt. He was immensely impressed by Cairo, which exceeded all his expectations. There, the Mamluk sultan Barquq received him with enthusiasm and gave him the important position of qadi, or justice, of the Maliki school of Islamic law. 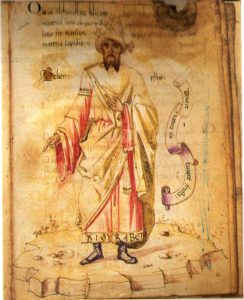 This, however, proved to be no sinecure. In his Autobiography, Ibn Khaldun describes how his efforts to combat corruption and ignorance, together with the jealousy aroused by the appointment of a foreigner to a top job, meant that once again he found himself in a hornets’ nest. It was something of a relief when the sultan dismissed him in favor of the former qadi. In fact, before the end of his life, Ibn Khaldun was to be appointed and dismissed no fewer than six times.

Ibn Khaldun was married and had children; he had a sister who died young—her tombstone survives—and his brother Yahya ibn Khaldun was also a very distinguished historian. However, we know very little about his personal life: It was not the Muslim, and in particular not the Arab, custom to include personal details in one’s writings. We do know, however, that at about this time, Ibn Khaldun’s family and household, which was essentially being held hostage at Tunis for his return, were given permission to join him in Cairo. This was at the personal request of Barquq, whose letter is quoted in the Autobiography. But the boat carrying his family went down in a tempest off Alexandria, and no one survived.

Three years passed. Ibn Khaldun dedicated himself to teaching and then at last set out to perform the hajj in 1387 with the Egyptian caravan. Ibn Khaldun says little of his pilgrimage, but he mentions that at Yanbu‘ he received a letter from his old friend, Ibn Zamrak, many of whose poems are inscribed on interior walls of the Alhambra. Ibn Zamrak, then the confidential secretary of the ruler of Granada, asked among other things for books from Egypt. It is one more example of how Ibn Khaldun maintained his intellectual contacts all across the Arabic-speaking world.

On his return to Cairo, Ibn Khaldun held various teaching posts, but from 1399 the cycle of political appointments and dismissals began again. The scholar had already witnessed at first hand the political upheavals caused by the various Berber dynasties in North Africa, as well as the success of the Christian powers in reducing the Muslim kingdoms in the Iberian Peninsula. Now he was about to witness another example of the rise and fall of empires, this time with an epicenter farther to the east than he had ever traveled.

In 1400, Ibn Khaldun was compelled by Barquq’s successor, Sultan al-Nasir, to travel to Damascus, where he took part in the negotiations with the Central Asian conqueror Timur, the Turco-Mongol ruler known in the West as Tamerlane. The aim was to persuade Timur to spare Damascus. Ibn Khaldun describes his conversations with Timur in some of the most interesting pages of his Autobiography.

In the end, however, the Egyptian diplomatic delegation was unsuccessful. Timur did sack Damascus and from there went on to take Baghdad, with great loss of life. The following year, Timur defeated the Ottomans at Ankara, taking their Sultan Beyazit prisoner. These events are described by the Spanish traveler Ruy Gonzáles de Clavijo, who went out to Samarkand in 1403 as ambassador to Timur.

Ibn Khaldun’s Autobiography continues for no more than a page or two after his return from Damascus, and he mentions only his appointments and dismissals. Although he never returned to Tunis, he continued to think of himself as a westerner, wearing until the last the dark burnous that is still the national dress of North Africa. He continued to revise and correct his great work until his death in Cairo on March 16, 1406—600 years ago this past spring.