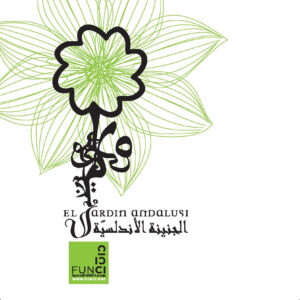 Publication wich accompanies the exhibition of FUNCI Gardens of Al-Andalus, and includes all the text of the same.  In it, the garden is considerate from different perspectives: spiritual, poetic, scientific and agronomic. The water, the landscape and the botanic species have their protagonism.

I.- The orchard garden 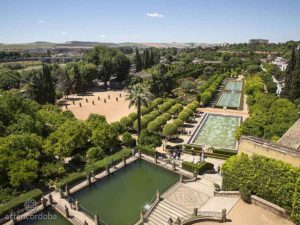 In al-Ándalus, gardens had more than just an aesthetic role. The orchard gardens grew aromatic plants, fruit trees and vegetables not only to please the senses of sight and smell, but also for agricultural purposes. This required careful distribution of water and led to the development of the science of acclimatization of new botanical species. The peoples of al-Ándalus had inherited this knowledge from their forefathers in the eastern Islamic world, and partly from their Roman forebears. Their proverbial thirst for learning led to major botanic and scientific developments. A true “green revolution” took place which spread agriculture all over al-Ándalus and sowed the seeds of trade in agricultural produce.

We know little about these orchard gardens. Ibn Luyun, a 15th-century agricultural specialist born in Almería in Spain, wrote Kitab al-filaha (“Text on Agriculture”) – in verse to make it easier to memorise – which gives us some ideas about them. According to the author, clumps of plants – generally aromatic – grew near the pools. Further back were flowers and evergreen trees. Vines, fig trees and other similar trees were planted around the edges of the estate to mark the boundaries of the property. Vine-covered pergolas provided shade to the walkways, one of which bordered the gardens of flowers and herbs, and the cultivated land was at a certain distance from the vines. The large orchards were planted to the north, to protect the garden from the wind.

Date palms were common in the orchard gardens of al-Ándalus, a reminder of the Arabian desert, cradle of the Islamic world. Other common species were pomegranates brought from Syria, as well as peaches, lemons, cherries, quince and bitter oranges. Fig, olive and apple trees, which had existed on the Iberian Peninsula for thousands of years, were also grown in the orchards. In amongst the trees were melons and watermelons, aubergine, spinach and broad beans as well as artichoke, carrot and lettuce, among many other crops that grew well thanks to the abundance of water supplied by the irrigation system.

The farmers of al-Ándalus were masters at grafting and developed certain ideas regarding the similarities and differences between various families of fruit trees. However, many such systems had previously been implemented by the Romans and had been described in detail by Columela in his writings.

Only fruit trees of the same species should be grafted, since the operation is difficult if they are not similar, and the more they resemble one another the better the results….If the trees are not sufficiently similar the graft will be weak, due to lack of compatibility. This is true for almonds and apricots, pears and quince.

Grafts were made in several ways: incision or cleft grafting, budding, whip grafting, the ‘Rumi’ technique”, drilling or boring, or through applying pressure by binding young branches together. Thus vines were grafted onto fig trees, roses to apple, almond, grapevine, blackberry, and wild pomegranate.

Agriculture in the Arab-Islamic world, especially in the Middle East and the Maghreb, was heavily influenced by Nabataean agricultural practices brought by Arabs who lived in the region of Palestine in pre-Islamic times. Besides various farming techniques, this heritage included many magical beliefs and practices.

Such beliefs were not wholly acceptable to orthodox Islam, though they were nonetheless frequently adopted by local farmers. The following are some of the more popular beliefs:

-According to Abu-l Jayr (11th century), if a tree is planted when the moon wanes it will be weak. It will develop slowly and bear little fruit.

There are still today many farmers who study the phases of the moon before undertaking certain agricultural activities.

-When a tree does not bear fruit, the owner must approach it holding an axe and accompanied by a friend, and tell him loudly that he has decided to cut the tree down since it is barren. The friend should persuade him to let the tree live one more year. The following year, the tree can be expected to bear abundant fruit.

Some Christian authors, even after the Catholic Monarchs (Isabella and Ferdinand) conquered Granada in 1492, attested to the fame of the farmers of Al-Ándalus. The following verses were written by Calderón de la Barca in his “Amar después de la Muerte” (Loving after death):

For not only earth they husband,
But the stones themselves they subject
To the servitude of green herbs;
For in the study of farming
They are so cunning, so able,
That their ploughshare’s motion
Makes pregnant the barren rock fields.(Teatro Selecto de Calderón de la Barca, Madrid, 1950)

The world of Islam emerged in an arid environment: the Arabian peninsula. Water was treasured by the first people of Islam, the Arab people, due to its scarcity, and their only source of water were the oases. This understanding of water as the source of all life is a common thread throughout the text of the Koran. “Do you not see that Allah sends down water from the cloud so the earth becomes green? Koran (sura 22, aleya 63).

“He it is Who sends down water from the cloud for you; it gives drink, and by it (grow) the plants upon which you pasture.

He causes to grow for you thereby herbage, and the olives, palm trees, grapes, and all the fruits” Koran (sura 16, aleyas 10-11)

As Islam spread through the Persian Empire, Egypt and Syria between the 7th and the 8th centuries, the Muslims learned how to irrigate, extract and utilise water, techniques which at that time were highly developed in those regions, particularly in Mesopotamia (Iraq).

Besides its use as drinking water for both humans and animals, water is essential in agriculture, and soon became indispensible in the construction of palaces. It also became a decorative element that served a myriad of purposes, from lighting effects to creating a refreshing, relaxing environment, and was often called upon to act as a mirror in which the visual effects of architecture could be reflected. Water was everywhere, in all sorts of garden and country estate in the form of fountains, channels, ponds and cisterns, irrigation ditches, or flowing over water wheels.

Narrow irrigation channels (known in Spanish as acequias, from the Arabic al-saqiya) were the main water conduits used by Muslims to distribute water over large areas or around small gardens. This irrigation system, based on channels of varying sizes, was used in ancient Babylon (7th century BC) in the hanging gardens, with water drawn from the river Euphrates. It then spread to the Persian Empire to cities such as Persepolis. Later on, the Romans, who inherited this tradition, created extensive irrigation networks throughout their provinces in the Mediterranean basin, especially in Hispania.

When the Arabs arrived in the Iberian Peninsula they were well acquainted with oriental irrigation systems. They gave new purpose to the dilapidated Roman irrigation infrastructure, extending it and building major, minor and lateral channels, creating an ingenious system for water distribution that was to be the basis for a new form of agriculture. There are many parts of Spain, particularly in the eastern region, where place names of Arabic origin referring to irrigation canals are very common. For example, the acequia in Beniscornia south of the Segura river, in the 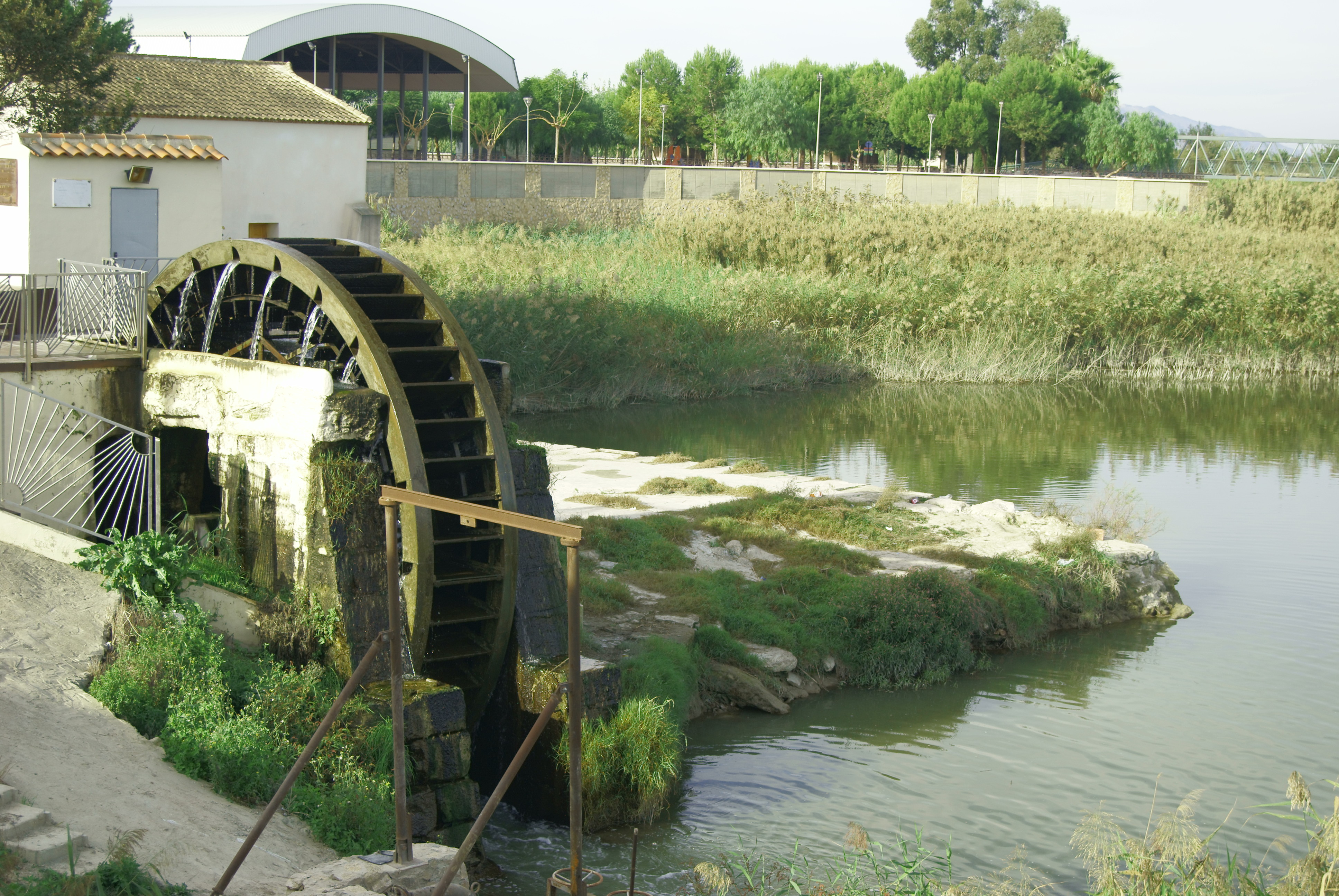 Water wheels (in Spanish noria, from the Arabic na’ura) powered by flowing waters or rivers originated in the Orient and were used in the Peninsula by the Romans, mainly in Hispania Baetica, to extract fast-flowing river water. Water was collected in a series of buckets or scoops mounted on the wheel, which was propelled by the current. When the wheel reached its maximum height, the containers emptied the water into a ditch from which it was distributed via channels to the orchards and gardens, as well as to ponds, cisterns and urban water supply systems.

The Arabs made intensive use of water wheels in al-Ándalus as one of the main methods of capturing river water. Some wheels measured more than 15 meters in diameter. There are still some Hispanic-Muslim water wheels to be seen in La Ñora and Alcantarilla (province of Murcia), Casas del Río (Valencia), along the Guadalquivir and Jalón rivers, and in Portugal.

There were also smaller water wheels driven by animals called al-saniya (Spanish “aceña”). These were used in smaller fields or plots to raise well-water. A number of these water wheels can still be seen today in Castile, most of them no longer in use.

The main purpose of rainwater cisterns (Spanish alberca, from the Arabic al-birka) was to provide a reservoir from which water could be distributed via the channel system. Their practical function was combined with the Hispano-Muslim sense of aesthetics, creating pools that became a feature in gardens and in architecture. The most renowned courtyards and gardens of the Islamic world featured large ponds such as the one in the 14th-century Patio de los Arrayanes, in the Alhambra, in Granada.

In Islamic tradition, water is considered a divine gift that does not belong to human beings. They are obliged to share it out fairly amongst those who need it. Based on this concept, al-Ándalus created a perfect irrigation system. Water tamed by dams along the rivers was distributed, following a strict schedule, by means of irrigation channels to every plot of land aquí han pasado a otra líneaaccording to its size and the volume of water available.

In the 10th century, a rank of officials was created to administer the system and ensure that water was shared in a fair and orderly manner: the wikalat al-saqiya, or “government of water distribution”. According to the well-known French Arab scholar Levi-Provençal, this institution was the precursor of the “Tribunal de las Aguas”, aquí también han pasado a otra líneathe tribune responsible for water distribution in Valencia.

Another water distribution technique was that known in Spain as “las señas”, still in operation in the Alpujarra region. This system harnesses water from mountain floodplains and channels it through clefts in the mountainside.