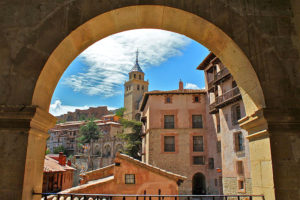 This international congress took place in Paris in 1991, at the UNESCO and the Institut du Monde Arabe, under the epigraph Contributions of Islamic Civilisation to European Culture. The congress was organised with the collaboration of the Council of Europe and the European Communities Commission (now, the European Union).

The primary target of this multi-cultural encounter was to inform European MPs about the importance of the influence of Islamic culture in Europe throughout history, and to sensitise them about the necessity to take concrete measures to help solve the inter-cultural problems which affect our present day communities. Noted experts in Islamic culture like Louis Baeck, Sherif Mardin, Oleg Grabar, Mohammed Arkoun and Rémi Leveau participated in the colloquia. The European Communities Commission granted the Islamic Culture Foundation the Distinction European Platform 1991 for this project.

Also, and most importantly, the Parliamentary Assembly of the Council of Europe approved Recommendation 1162, a clause advising its members to promote the knowledge and study of Islamic culture in European countries to increase awareness and understanding of common cultural roots and encourage the development of well-adjusted, muti-cultural communities.