Much of the Islamic world has just finished celebrating the ‘Mawlid’, the birth of the prophet Muhammad. For the muslims this is an occasion of social connection and spirituality. However it is not only Muhammad that they recognize, but also all the previous prophets from the monotheistic religions mentioned in the Coran: Adam, Abraham, Lot, Moses, Jesus, and up to 21 more.

The Moor city of Salé, next to Rabat, the capital of Morocco, has lived its particular style of pilgrimage, a tradition of ottoman origin, in spite of the fact that the Turks never reached this country, the most western of the North Africa. A party with a local flavour, inviting participation and intimacy, alive with color, that fills the Streets and is focused around the mausoleum of Sidi Abdallah Benhasun and on the largest mosque, both of them at the heart of the medina. 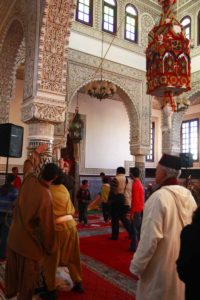 It’s the Feast of the Candles, a procession of banners made of tiles of coloured wax, headed by the Hasuní brotherhood, in the midst of a throng of shawms and cymbals, which reaches its destination in the mosque and the mausoleum of Sidi Abdallah. For two or three days the entire population, men and women, old and Young, modern and traditional, meet each other in this beautiful opportunity to celebrate with chants, prayers, dances and photos – above all photos and videos made with mobile and iPad – the birth of the prophet of Islam.

It is said the sultan Saadí of the XVI century, Al Mansur Edhabi (in arabic ‘The Victorious and Golden One’) traveled to Turkey in the sixteenth century and was enchanted with the processions of candles that the Turks held at this time. Just that, in the words of the deacon of the ‘chorfa’ of Sale, Abdelmajid Hasuni: ‘Here the ritual acquired a particular Moroccan flavour, as can be seen in the style of the candles’. Effectively, the standards of wax-covered Wood are made in the Moroccan fashion with lobed arches, Moroccan stars and that typical proclamation: ‘Allah, el Watan y el Malik’ (where we would say ‘For God, King and Country’). At the same time they maintain the reminiscence of ottoman architecture of the great cupolas. However what is missing here is the presence of flames since the candles remain unlit (whilst in Turkey the flaming lanterns and torches have a key part). 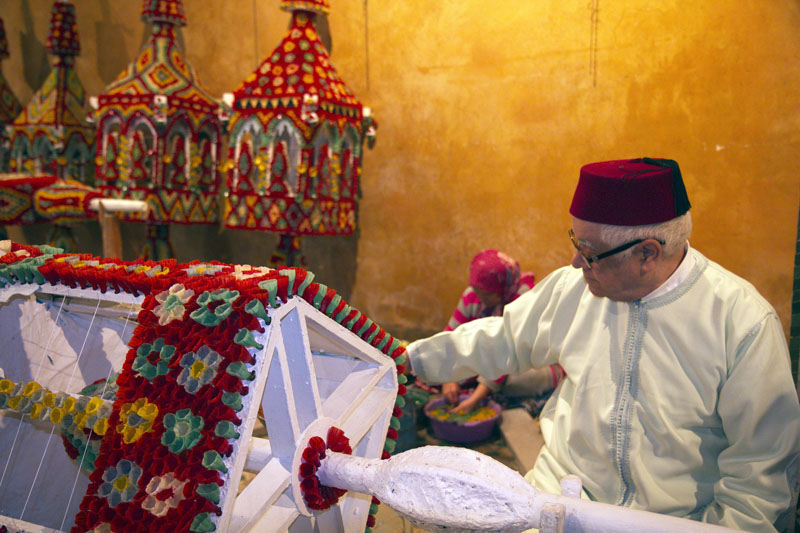 Just one Slawi family, the Ahmed y Abdelkader Belakbir brothers, have taken responsibility for perpetuating this tradition, orchestrating the preparation of these fabulous standards for a whole six weeks. Every year together with their wives and children (those that want to get involved) they cover the huge wooden banners with tiny drips of wax (that remind us of bees), whose weight in the procession will subsequently bear down on the belts of the brotherhood of bearers. Afterwards, and following the traditional parade before the authorities, the hasuníes join the Young students of the Coran and other brotherhoods to hang the the colourful standards in the middle of the dense crowd, in the sanctuary and in the mosque, which is ornamented in the most classical North African style, dating from the nineteenth century.

Once outside the temple and away from the hubbub, they find themselves before the Atlantic Ocean, so full of life and energy. In this way they reach the cemetery of Salé, humble and serene, and bathed in the magical light of the close of day, to remind us that life is as short-lived and fragile as a candle’s flame.