The exhibition Qalam, Words of Art opened on Thursday 29 April in Rabat in the huge expanses of the new National Library of the Kingdom of Morocco. A project created by the Islamic Culture Foundation (FUNCI) in partnership with the National Library of the Kingdom of Morocco (BNRM), this exhibition aims to show, through the many styles and periods of the rich tradition of Islamic calligraphy, penmanship and book-making, that the messages conveyed by the Islamic civilisation are universal ones.

The spectacular, decidedly contemporary design by FUNCI’s creative director, Miguel Ripoll, brings out the very best from this rich collection of Andalusian and Maghrebi manuscripts and priceless archaeological objects on loan from different museums in Morocco. 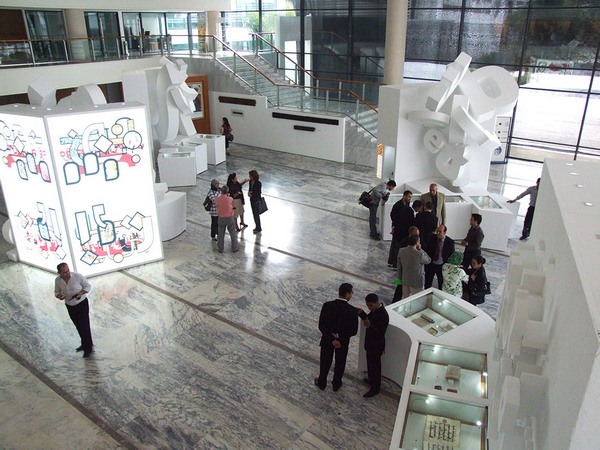 Present at the opening were the Moroccan writer and Minister of Culture, Besalem Himmich, the Governor of the region of Rabat-Salé-Zemmour-Zaër, Hassan Amrani, and the Spanish Ambassador to Morocco, Luis Planas, as well as many other ambassadors to Morocco and prominent figures from the arts and  politics. About six hundred guests enjoyed an event at which the master works of the past were on view in a dialogue with contemporary forms of expression such as graffiti, by Rabie from Meknès, and interactive laser writing. The excellent crossover music group, Frères Akkaf, helped create an intercultural ambience. 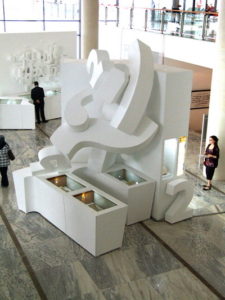 Visitors were able to see manuscripts of universal importance such as the treatise on surgery by Abulcasis (11th century) and a rare Green Koran from the Meriní era, both from the Moroccan National Library collection. Also on display until the 30th of June is the Chellah funerary stone, from the Archaeological Museum in Rabat, and a number of items bearing inscriptions from the National Museum of Jewels and the Batha museum in Fes.

“We have to acknowledge the merit of scholars who devoted their lives to disseminating knowledge and sharing it selflessly with others in spite of their very limited resources”, stated Project Director and President of FUNCI, Cherif Abderrahman Jah, during his visit.

Those present at the opening of the exhibition also witnessed a live display of the art of bookbinding by skilled artisan Saïd Benmoussa, and of Arabic writing, by celebrated master  calligrapher Mohamed Qarmad. For the two months during which the exhibition will be open to the public, the two of them will be holding workshops demonstrating their skills. “Qalam” also includes an exhibition of classic calligraphy by Tahar Bouhlal.

“This project, focused on Arabic-Andalusian manuscripts. aims to outline our common past with the goal of promoting knowledge, recognition, respect and dialogue amongst cultures”

“This project, focused on Arabic-Andalusian manuscripts. aims to outline our common past with the goal of promoting knowledge, recognition, respect and dialogue amongst cultures”, stated Driss Khrouz, Director of the National Library of the Kingdom of Morocco. Luis Planas described the exhibition as “the most beautiful I have seen in my six years as Spanish Ambassador to Morocco”.

This cultural cooperation project was sponsored by a large number of Spanish, Moroccan and international institutions such as the Spanish Agency for Development and Cooperation, the Spanish Ministry of Culture, the Moroccan Ministry of Culture, the Spanish Embassy in Morocco, the Cervantes Institute in Rabat, UNESCO, ISESCO, the BMCE Foundation, the CDG Foundation and many others, under the general patronage of the Spanish Presidency of the European Union and the Alliance of Civilisations. A handsomely illustrated catalog on the exhibition and its contents has been published by the Islamic Culture Foundation to mark this unique event.