Trade is often regarded as one of the key indicators of a civilization’s relative success. By this metric, few were more successful than the Nabataeans, who, from their capital at Petra, presided over a trade route that stretched to Europe, Central Asia, and North Africa from its epicenter in Arabia. The Nabataeans were a highly developed peoples, and their culture, though related to those of the surrounding area, was unique; as were their achievements – most notably their dominance in commerce – and the history of their kingdom’s rise and fall.

During their time as one of the many tribes roaming Arabia, the Nabataeans became notorious for their inconquerability. Despite having had their land invaded multiple times – by the Assyrians, Persians, and Macedonians – they were at no point subdued by a foreign aggressor. Settling in what is now Jordan around 200 BCE, they established a kingdom with its capital at Petra and rapidly became one of the predominant entities in the Mediterranean and Near-East regions.

Through commerce and tariffs, the Nabataean Kingdom became one of the wealthiest states in the surrounding area, peaking in power in the first century BCE – though a Petra conquered by the Romans would remain a bustling trade hub until the third century CE.

The Nabataeans were a culturally advanced peoples: creating such works as the carved cities, of which Petra is the largest and most recognized. In addition, the Nabataeans were known for their pottery, which often depicted botanical designs. Though their exact ethnicity is unknown, they were certainly a Semitic peoples, and are widely believed to have been proto-Arabs. Their language was an offshoot of Aramaic; with a writing system that was unilaterally adopted in 150 BCE and an alphabet that fathered that of Arabic and was fathered by that of Hebrew.

Trade, the primary occupation of the Nabataeans after their settlement, earned their kingdom a sizable fortune. Being that it was located both on the Incense route and at the junction of Arabia and the Mediterranean world, Petra was at an ideal geographical location for becoming the center of a trading empire. Despite lacking the means to produce frankincense and myrrh – the two products primarily traded along the Incense route – the Nabataean kingdom secured itself as a vital middleman on the route, earning itself a powerful position on the political, cultural, and economic stage; as well as a reputation throughout the region of shrewdness and affluence. 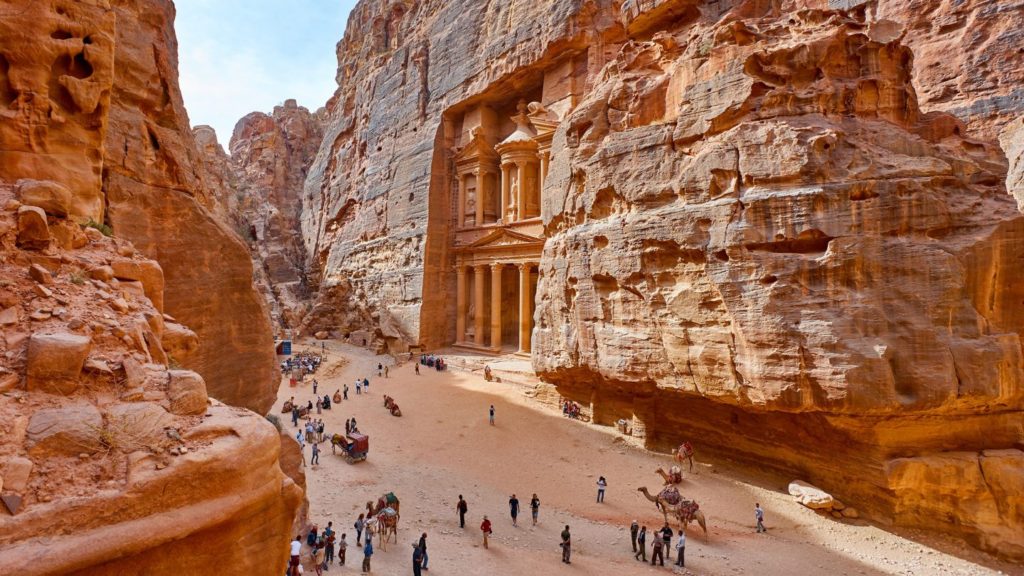 The fall of the Nabataean state was rapid – that of its cities less so. After a brief period as a client state of Rome, the kingdom was annexed by Emperor Trajan in 106 CE. Its cities continued to prosper under Roman rule, though a gradual shift from the predominance of landborne trade to that of seaborne trade led to a decline in the mercantile dominance of the region; the exceptional prosperity of which is considered to have ended by the third century CE. In the year 363 CE, an earthquake would further weaken the region: destroying about half of Petra. By the seventh century CE, Petra would be abandoned; and the relevance of the remaining cities would be severely diminished.

The Nabataeans, despite their only brief period of significance, were a highly developed peoples. They were the builders of Petra – along with several other UNESCO World Heritage Sites – as well as the creators of a trade network stretching from Arabia to Europe to North Africa to Central Asia. Despite their hostile desert environment, they managed to establish a stable, wealthy kingdom, utilizing cisterns and waterways to store what water they did receive. Despite their lack of harnessable resources, they prospered, utilizing their geographical blessings to secure a position of power. Despite their ephemeral position of power, they created a unique history; with monuments – testaments to their power, however transitory – that exist to this day.