Kairouan stands as a main cultural and religious metropolis in the Tunisian Republic. It still preserves its original blend of Arab-Islamic architecture with its souks (market places), alleys, and old streets. In 1988 the city was inscribed on UNESCO world heritage list. Kairouan is located some 100 miles (156 km) south of Tunis. Its founding is associated with Uqba Ibn Nafi, a celebrated Muslim Arab general, who said at the moment when he reached the Atlantic coast,

“Oh God, if the sea had not prevented me, I would have galloped on for ever upholding your faith and fighting the unbelievers!”

The term appears in the work of Imru’ al-Qais, a celebrated Arabian poet. Kairouan during the Islamic eras When Uqba Ibn Nafi’ came to the site of present-day Kairouan in 50 AH/670 AD, he erected the congregational mosque which carries his name (the Mosque of Sidi Uqba) in the centre of the city in a place called al-Simat al-Kibir (main street) and a dar al-imara (place of the governor). Kairouan soon grew into a major metropolis and a popular destination to which people would come from afar.

However, the city receded somewhat in importance after the dismissal of Uqba Ibn Nafi’ and appointment in 55 AH/675 AD of Abu al-Muhajir Dinar to the position of Emir of Ifriqiya. Abu al-Muhajir Dinar settled in another place two miles away from Kairouan. It was in 62 AH/683 AD that Ummayyad Caliph Yazid Ibn Muawiyah restored Uqba to his previous position and ordered him to ensure that Kairouan maintains its prominent position. In 63 AH/684 AD Uqba was ambushed and killed by Kusaila al-Bardnissi in Tahuda near Biskra in Algeria. The Berber Chief Kusaila now held undisputed mastery over North Africa and marched to Kairouan in triumph.

In 69 AH/690 AD, Kairouan was recovered by Zuhair Bin Qais Al-Balaoui. But, it was during the time of Umayyad army general Hasan ibn al-Nu’man that Kairouan was effectively pacified and re-established as the capital of Ifriqiya.He re-built the Uqba mosque, established official registers and levied land taxes (against Muslims) and poll taxes (against Christians), thus paving the way for Musa bin Nusair (88 AH/707 AD) to carry on the Muslim conquest of the Maghreb region of North Africa.

Kairouan during the Aghlabid Dynasty 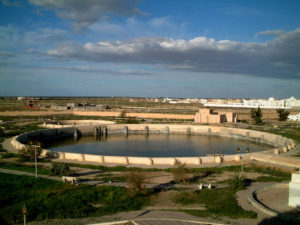 Under the Aghlabids Kairouan has become a self-governing part of dar al khilafah (the capital of the Caliphate Rule) in Baghdad. In 184 AH/800 AD, the Abbasid Caliph Harun ar-Rachid named Ibrahim ibn Al-Aghlab as hereditary Emir of Ifriqiya. In 185 AH/801 AD, after the pacification of the country, Ibrahim ibn Al-Aghlab established a residence some three miles away from Kairouan which he called al-Abbasiya. Ibrahim ibn Al-Aghlab built up many an important school of jurisprudence (the Maliki Madhab was dominant).

Under the Aghlabid rule, many of the monuments were established and the city became a major point on the ivory and gold trade route to Sudan and Western North Africa (Morocco). Kairouan during the Fatimid rule When the Fatimids took control of Ifriqiya, Abu Abdullah al-Shi’i pledged protection of the lives and properties of inhabitants in Kairouan, which was a stronghold of the Maliki doctrine in Ifriqya. After defeating Abu Zayd in a battle fought in the precincts of Kairouan, the Fatimid Caliph al-Mansour made a compromise with the population of Kairouan to make of it its own new capital and to name it after his name as (al-Mansouria, the resilient); which confirms that Kairouan remained during the Fatimid rule a vibrant hub and a prosperous economic centre of Ifriqiya.

Kairouan and the Sanhaja Dynasty

When the Fatimid Caliph al-Mu’izz li Din Allah entered Cairo in 361 AH/972 AD, Kairouan became one of the major centres for the manufacturing of fine garment and pottery, and gathered all ingredients of the Mediterranean  metropolises of that time, along with Cordoba, al-Fustat (ancient city south of present-day Cairo), and Constantinople.

Kairouan and the Banu Hilal Invasion

As a result of the growing animosities between Sanhaja and Zenata tribes and the fierce struggle for power and rule in Morocco between Banu Ziri and Banu Hammad, the resources of Ifriyia and Kairouan were squandered. Worse still, since 395 AH/1005 AD, the Kairouan civilization was hit by successive lean years which precipitated it into a fragile situation. The Banu Hilal invasion was the nail in the Kairouan civilization’s coffin, leading outright to its demise. Following his defeat at the hands of the army of Tamim Bin Al-Mu’iz in 476 AH/1083 AD, Malek bin Alaoui al-Sakhri entered Kairouan.

Thereafter, the prince of Gabes, Rafi’i Bin Makki bin Jami’i, sought refuge in Kairouan after being defeated by the army of the Sanhaja prince Yahya Bin Tamim at the gates of Mahdia. It may be said that the last king in Kairouan from the Banu Hilal Arab tribe was Muhriz Bin Ziad Al-Fadi’i, who was defeated by the Almohad Caliph Abdelmoumen Bin Ali in 555 AH/1160 AD in a decisive battle fought nearby Kairouan. Nevertheless, the city resisted the Almohads and its inhabitants including Arabs and their allies such as Banu Ghania refused to surrender, even after being given pledge for safety by the Almohad Caliph Yacoub al-Mansour, when he reached Kairouan in 582 AH/1186 AD.

Kairouan under the Hafsid Dynasty 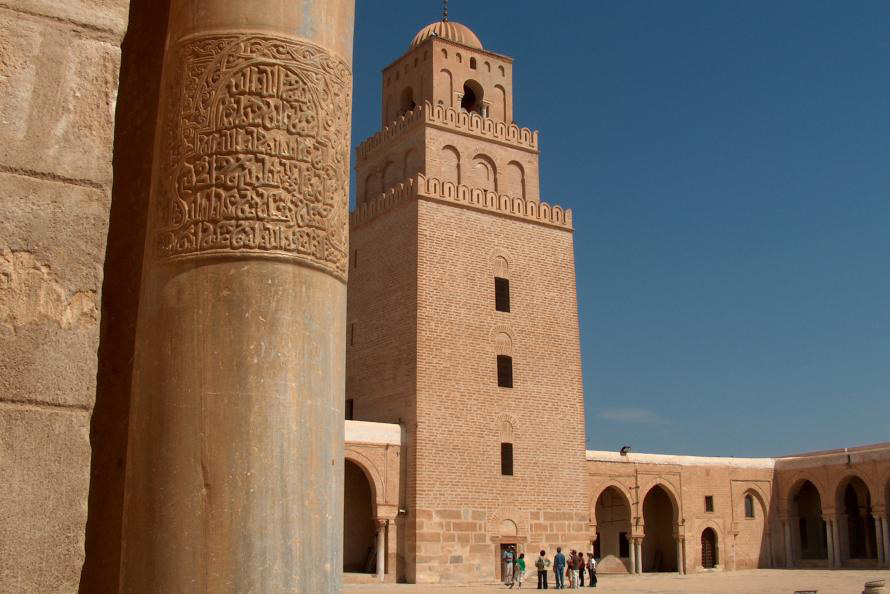 With the coming of the Hafsids, Kairouan emerged again from its ruin. During the reign of Abu Zakariyya Yahya (624 AH/1227 AD), the usurper Ibn Abi Umara took refuge in Kairouan in 681AH/1282 AD. Mustansir and the princes who succeeded him were particularly occupied with the Great Mosque. They consolidated its walls and renovated its ceilings. Mausoleums, saints’ shrines and domes were built by the sufis and religious men who multiplied in the city, giving it the attraction of great spirituality. Abu Said al-Tinmali, al-Mustansir’s renowned vizier, ordered mosques to be refurbished.

He renovated the Zaytouna Mosque in 660 AH/1262 AD, and put into perpetual mortmain several stores for its benefit in Tunis, allowing it in the late 18th century of Hegira to perform Friday prayer services. Mosques, such as the Ibn Khairoun Mosque (844 AH/1440 AD), the Hanging Mosque, and the Ibn Naji Mosque (built up in the 8th century of Hegira by four of Naji’s sons), were renovated. With the arrival of the Hafsids, souks were reorganised and the city became a tanning, leather and weaving centre. It became a commercial market supplying its hinterland.

Kairouan as capital of the Shabbi Dynasty

Kairouan remained loyal to the Hafsids until Sultan Moulay Hassan asked for support from the Spaniards to restore his rule. This constituted a provocation to Kairouan sense of belonging to Islam, hence the waging of fierce resistance by Sheikh A’arafa Al-Shabbi in 948 AH/1538 AD against Moulay Hassan who lost the first battle in Batin Al-Qarn in 947 AH/1540 AD, then was defeated in the second battle in Jammal though he was backed by the Spaniards. Thereafter, his nephew, Mohammed Bin Abu Tayyeb, took over power and entered into alliance with the Spaniards.

He treated harshly the inhabitants of Kairaouan and even some dignitaries of anti-Shabbi Zaouiyas such as the al-Gharianis who sought -and obtained- aid from Derghout Pasha in Tripoli to remove the Shabbis and to replace them in 965 AH/1557 AD by Sheikh Mohammed al-Ghariani, protected by a Turkish garrison under the commandership of Shatman Bin Mohammed in 965 AH/ 1557 AD.

Kairouan and the Ottoman Empire

Kairouan remained for a while under Spanish rule until the time when Ramadhan Pasha was appointed by Ottomans as governor of the city. Ramadhan Pasha attacked the Spaniards only to withdraw again to Kairouan. Under the command of Khizr (or Haydar) Pasha, Ramadhan’s successor, who stayed in al-Mahdiya and in it he struck gold coins, the Ottomans expelled the Spaniards and marched to Tunis in triumph in 981 AH/1573 AD. The Ottomans safeguarded Kairouan as the place in which Islam gained its first foothold in the Maghreb.

Under their rule, the bloodline of Mohammed al-Ghariani continued to hold the hereditary custodianship of the Mashiyakha (Sheikhdom) of Kairouan, and farmers were exempt from paying agricultural taxes. During the Muradid era, when the country was pacified, Kairouan was given special attention by Mourad I. He renovated the ceilings of the Great Mosque. Hamuda Pasha (1041-1076 A.H/1631-1666 AD) rebuilt the Abou Zamâa al-Balaoui (one of the companions of Prophet Mohamed) mausoleum, dedicated a charitable donation to the people of Kairouan, and protected them from the Banu Said, who assaulted on Kairouan and caused damage to agricultural lands.

Ali al-Hannashi, Hamuda’s governor of Kairouan, restored to the city its status. However, the city soon lost its position of eminence under the rule of Murad III (1110 AH/1699 AD). He held grudge upon its people and killed its religious scholar and Sharif, Abu ‘Abd Allah Muhammad al-‘Awani. The Kairouan inhabitants, instilled with terror and fear, retreated into their homes when Murad III in a winter day went out from his residence.

In response, he besieged the city and, backed by Khalil Bey of Tripoli (1112 AH/1700 AD), who supported him in the war he fought against the Algerian armies, allowed it to be pillaged. As indiscriminate killing and mutilation of population in Kairouan persisted, the last Muradid Bey was assassinated in 1113 AH/1701 AD by Ibrahim Sharif, who then ruled until 1705 when Husayn Ibn Ali established the rule of the Husaynid Beys.

Kairouan during the rule of the Hussaynid Beys

The Husaynid Beys attached special attention to Kairouan. This and the architectural revival witnessed during the Muradid Era have earned Kairouan a prominent position as a second main city in Tunisia. Kairouan preserved this status until 1881 when the French Protectorate was established.