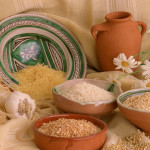 The Foundation considers diverse gastronomic traditions and culinary idiosyncrasies as an important part of the present daily life (and historic heritage) of the Islamic world. They are associated to both rural and courtly culture; through the historic recipe books not only the different cultural influence have been detected but also the development of the agriculture  and trade, as well as the importance given to dietetics and sanitary hygiene. 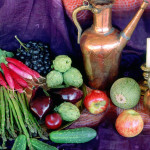 Henceforth, coinciding with the celebration of the Foundation’s various international colloquia about Islamic culture, several public demonstrations and tastings of the rich medieval Hispanic-Magrebi cuisine have taken place. Paradores de Turismo (the Spanish National Tourism Board’s network of restored medieval hotels and castles) have been in charge of putting into delicious practice ancient recipes, based on meticulous research carried out by the Foundation. The demonstrations were accompanied by lectures given by experts Margarita Serrano, Esperanza Torija and Manuel Martínez Llopis.

Also, to promote the local openings of the exhibition Los Aromas de al-Andalus, (which is still on tour in Spain), the Foundation organises occasional lectures on, and practical demonstrations and tastings of, the cuisine of al-Andalus.